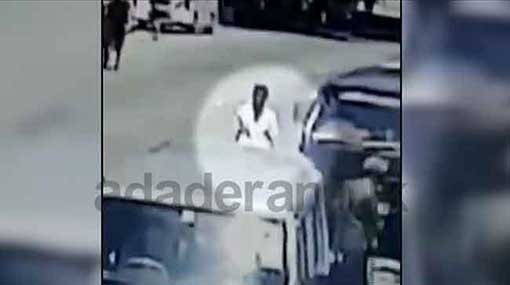 Nervous bomber at lodge in Dehiwala captured on CCTV

CCTV footages of the suicide bomber at a lodge located near the Zoological Garden in Dehiwala on April 21st have been released to the media.

The bomber has been identified as Abdul Latif Jameel Mohamed.

The CCTV footages of the bomber show him initially attempting to detonate his vest at the Taj Samudra Hotel in Colombo.

However, upon failing to set off the bomb at the hotel after three attempts, the bomber seemingly decides to leave the hotel at 8.49 a.m.

The bomber appears to hover around nervously as he failed to detonate the vest, then he walks towards the door to leave Taj Samudra dragging two carry-on luggage. He pauses again and turns to walk again towards the door, leaving behind one of the luggage in the lobby. A hotel staff calls him and points to the luggage he left behind, then helps him to take it out of the hotel.

The suicide bomber gets on to a three-wheeler at 8.55 a.m. and arrives at the Tropical Inn lodge in Dehiwala at 9.09 a.m.

Twelve minutes later, the bomber comes out of the lodge at around 9.21 a.m. and walks towards the Zoological Garden by himself.

He then enters a nearby Muslim mosque at 12.35 p.m. and spends nearly three minutes inside the mosque and then comes out to sit on the staircase.

The bomber then rushes back into the mosque, prays for a while and sits in a corner apparently in deep thoughts.

The CCTV footages also showed the bomber joining a prayer session with other devotees and then engaging in a conversation with them at the entrance of the mosque.

A group of men, growing suspicious of this stranger, can be seen questioning him, however, the bomber takes off from the mosque premises and returns to the lodge in a three-wheeler at around 1.25 p.m.

Nearly five minutes later, the bomber had set off the detonator, killing two others at the site.