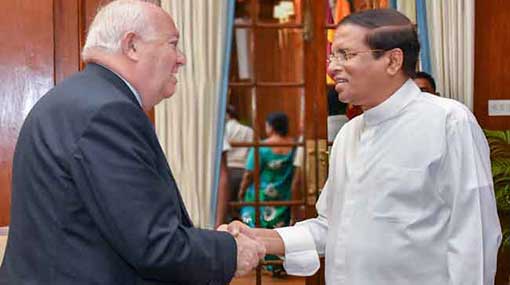 Mr Moratinos, former Minister of Foreign Affairs and Cooperation of Spain arrived in Sri Lanka as a Special Representative of UNSG and called on President Sirisena at the President’s Office today (30).

The UN Under Secretary General has praised the President’s efforts and said that the international community is solidly behind these efforts to eliminate Islamist terrorism. He has said that UNSG would send a team of counterterrorism experts to assist Sri Lankan military officers by providing expertise and know-how. Mr Moratinos, a former President of the United Nations Security Council (UNSC) has said that his country Spain, too, came under a terrorist attack by Islam terrorists of Al Qaeda in 2004 and added that both Spain and Sri Lanka are peaceful, friendly countries hospitable to tourists and expressed dismay at such countries becoming targets of terrorists.

Mr Moratinos has stated UN Alliance of Civilizations has been entrusted with the task of compiling a UN report on the protection of places of religious worship and sought President Sirisena’s proposals for inclusion in the report. He has said all forms of heinous attacks on places of religion are considered most barbaric, inhuman attacks on humanity and the entire world condemns such attacks.

President Sirisena expressed his gratitude to the UNSG and the Under Secretary General for the support extended at this difficult occasion and said called for assistance to curb terrorism. He said that foreign expertise and other assistance are required. However, he clarified that Sri Lankan forces are quite capable and said the country did not want foreign troops for these operations.

President Sirisena and UNUSG Moratinos have discussed the current steps taken to restore peace and maintain law and order and issues regarding refugees in Sri Lanka, the PMD said.