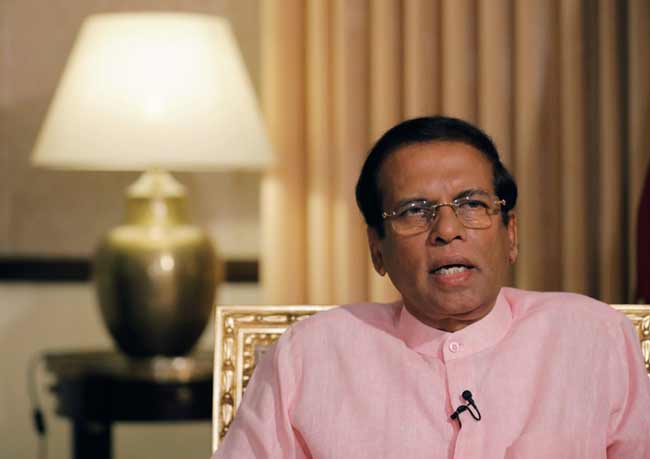 President Maithripala Sirisena said on Saturday the security forces would “eradicate terrorism” following devastating suicide attacks on Easter Sunday and restore stability before a presidential election due by year-end.

Sirisena also said in an interview he believed Islamic State was behind the April 21 attacks, which targeted churches and luxury hotels and killed more than 250 people including 42 foreign nationals. The group has claimed responsibility.

“Elections cannot be postponed, therefore before the elections, I will bring about stability and I will eradicate terrorism,” Sirisena told Reuters.

The presidential vote is likely to take place between Nov. 10 and Dec. 10 and sources close to Sirisena have told Reuters that he would seek re-election.

“We have already identified all active members of the group and it’s a case of now arresting them,” Sirisena said, adding that there were a further 25 to 30 “active members” linked to the bombings still at large.

Sirisena said that all indications suggested Islamic State had been involved, adding: “It’s crystal clear because after the attacks the IS organization made an announcement claiming responsibility for the bombings.”

Sri Lanka authorities have previously said that they suspect the attackers had international links, although the precise nature of those connections is not known.

Sirisena said that intelligence services from eight countries, including the U.S. Federal Bureau of Investigation and Interpol, were helping Sri Lanka with the investigation.

Local intelligence officials believe that Zahran Hashim, a radical Tamil-speaking preacher from the east of the Indian Ocean island nation, may have been a key player in plotting the bombings. Officials believe he was one of nine suicide bombers.

Sirisena said that the military and police have made huge progress with their investigations, but emphasized that more needs to be done.

“There are another 25-30 suspects still at large, but there is no information yet to say these suspects are suicide bombers.”

Scores of suspected Islamists have been arrested after the Easter attacks shattered the relative peace enjoyed by the multi-ethnic nation since a civil war ended a decade ago.

Sri Lanka’s security forces were on high alert amid intelligence reports that militants were likely to strike before the start of the Islamic holy month of Ramadan, due to begin on Monday.

The government has banned women from wearing face veils under an emergency law that was put in place after the attacks.

“This is not a Sri Lanka issue, it’s a global terrorist movement,” Sirisena said. “Even advanced countries like the U.S., Russia, UK, Germany, India, and Australia together haven’t been able to completely eradicate this IS global terrorism menace.”

Sri Lanka’s leaders, including the president, have come under heavy criticism for failing to heed warnings from Indian intelligence services - at least three in April alone - that an attack was imminent.

Sirisena denied he had knowledge of the warnings before he embarked on an overseas trip on April 15.

“Had I known about this, I would have taken appropriate action, and not gone overseas,” he said.

Critics said infighting between the president and Prime Minister Ranil Wickremesinghe had undermined the response to the militant threat. But Sirisena said he and the prime minister were cooperating on national security issues.

Sri Lanka’s economy, already struggling with growth slipping to a 17-year low in 2018, has been dealt a “big blow” by the attacks, Sirisena said.

The tourism sector has grown rapidly in the last decade since the Sri Lankan government defeated the rebel Tamil Tigers. Around 2.5 million tourists visit the island nation each year.

“It’s a big blow to the economy, as well as the tourism industry,” Sirisena said. “For the economy to develop it’s important tourism to return to where it was before the attacks.”