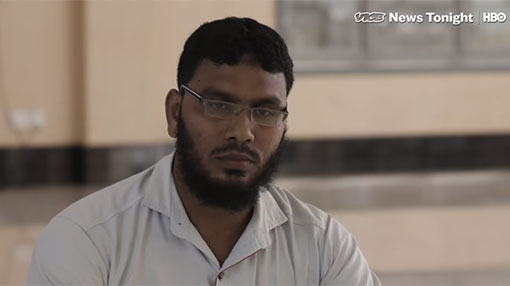 The ringleader of terrorist attacks that killed 257 people on Easter Sunday in Sri Lanka was a cruel and stubborn man who does not represent National Thowheed Jamath (NTJ), said his former friend and now leader of the outlawed Islamist group.

“[Mohammed Zahran Hashim] has two behavioral personalities,” Mohamed Yusef Thaufeek, NTJ’s leader, told VICE News. “One is stubbornness. And he has a tendency to lie. He has both behaviors. No matter what you tell, he never listens, and never accepts it. He has that type of behavior.”

Until Easter Sunday, NTJ was just one of many peripheral hard-line religious groups in the Buddhist-majority nation. Following a strict Wahabist interpretation of Islam, members were on the police radar due to skirmishes between other religious groups and acts of vandalism against Buddhist statues, but the group itself was not a major security concern to lawmakers and would have been unknown to most Sri Lankans.

Now, it’s been outlawed by the government and is at the center of a sprawling investigation into one of the deadliest terrorist attacks since 9/11. It can thank its founder, Mohammed Zahran Hashim, who allegedly planned the Easter attack on several churches and hotels with help from ISIS.

In claiming responsibility for the attacks, ISIS released a video in which Zahran is seen alongside eight other people pledging allegiance to the terror group. Later, authorities confirmed that Zahran was one of the suicide bombers who targeted upmarket hotels in the island nation’s capital, Colombo.

Thaufeek does not deny that the attacks were committed by the founder and former members of NTJ (Hashim established the group in 2012), or that a further suicide bomb that killed 15 people was committed by Zahran’s brothers.

He does, however, reject the idea that those attacks are representative of the group he now leads.

“This is not a terrorist movement. It is an organization under Sri Lankan sovereignty. National Thowheed Jamath does religious and social services,” said Thaufeek. He pointed to a letter written in Tamil dated Dec. 24, 2017, which he claims is evidence that Zaharan was dismissed from NTJ.

He said it was the events leading up to Zahran’s dismissal from the group that appear to signal the beginning of his journey into violent extremism. Earlier that year, following violent riots against Sufi worshippers in Kattankudy in which several people were arrested, Zahran became a target of the police. He soon fled Kattankudy but then began releasing Facebook videos.

“A few months went by, and after that, his talking style begins to change,” said Thoufeek. “He starts talking against the Sri Lankan government. He said the Sri Lankan government’s parliamentary system is useless, that the court system is no longer useful. People couldn’t believe that he used to be part of their movement and is now saying all these things. There seems to be such a drastic change. So what we did was right away we joined forces and decided to officially dismiss him from the organization.”

Zahran’s Facebook rants concerned others in Colombo. Hilmy Ahmed, vice president of the Muslim Council of Sri Lanka, said he had alerted the authorities to Zahran’s violent rhetoric.

Referring to one video, Hilmy said, “He is basically calling for the killing of all people who do not believe in Islam. It’s hate speech. They would have charged him if they’d found him. They couldn’t find him.”

Missed or ignored warnings by the government have been the focus of intense debate and scrutiny since the deadly attacks on Easter Sunday. In January, a warning came that radical Islamists were stockpiling weapons and detonators, then three more warnings from Indian Intelligence came in April alone. The first on April 4, followed by another on April 11, then again just hours before the bombings on the 20th. Each with more details of targets, names and even the suspects’ movements.

Thaufeek wasn’t surprised last week when police arrived to seize the NTJ mosque during our interview and take him in for questioning.

“We were not involved with him. It’s because we were with him at one point that we are constantly being harassed,” he said. “But we can’t stop the government from making whatever decision they decide to make.”

Now, as the investigation turns to southern India, where it is believed Hashim trained, Sri Lankan Muslims who’ve been voicing their concerns of extremism for years worry what the government’s response will mean for their community.

“As somebody who has been working with the Muslim community, we fear the repercussions of this, and we’re not sure if they will fade away easily,” said Hilmy Ahmed, vice president of the Muslim Council of Sri Lanka. “The bridge-building will have to take place immediately, and probably it will take years to get back.”