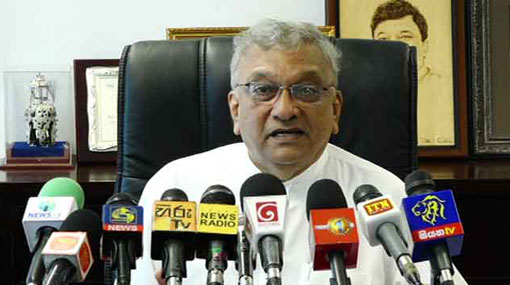 The Supreme Court, following its scrutiny of Counter-Terrorism Act (CTA), has recommended the inclusion of death penalty to the proposed Act, says the Leader of the House Minister of Public Enterprise, Kandyan Heritage and Kandy Development Lakshman Kiriella.

Addressing the media at the ministry yesterday (13), Minister Kiriella stated that under the existing Prevention of Terrorism Act (PTA), the death penalty cannot be imposed on terrorists even if terrorist act cause fatalities.

The CTA further allows taking legal action against locals as well as foreign nationals who engage in terrorist activities, which is not sanctioned by the existing PTA, Minister Kiriella commented.

The CTA was initially submitted to the Parliament in 1979, however, ‘the face of terrorism’ has completely changed as of today, the Minister added.

The Opposition Leader had agreed to the amendments made to the CTA when the Act was taken up at the Parliament a one-and-a-half month ago and suggested to appoint a commission to make the necessary amendments to the Act, Minister Kiriella further said.

Speaking further, Minister Kiriella called on the Opposition Leader to discuss the proposed CTA and to reach an agreement concerning the Act.

The CTA under no circumstances intends to harass the Opposition or help the government to remain in power, Minister Kiriella remarked, addressing the media.