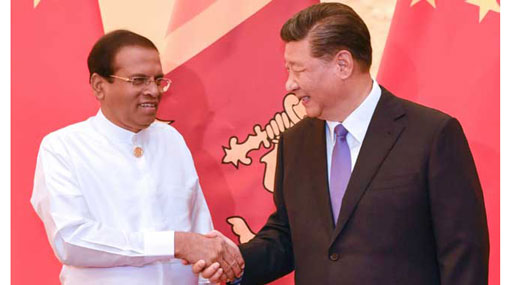 President of China Xi Jinping has assured President Maithripala Sirisena that China is ready to render its support to Sri Lanka to eradicate terrorism and to ensure the country’s security.

During the bilateral discussions held between President Sirisena and the Chinese President Xi Jinping yesterday (May 14), the steps taken by the government to ensure the national security following the April 21 terrorist attack as well as the steps taken to protect the country’s people were discussed in detail.

The Chinese government will also grant a financial donation of Rs Rs 2,600 million for the activities of the Sri Lankan security forces in the aftermath of the emergency situation resulted by Easter attacks.

As per the special request made by President Sirisena, the Chinese government has agreed to provide 100 SUVs and other equipment worth Rs 1,500 million to the Sri Lanka Police Department.

Following the bilateral discussion yesterday, President Sirisena and President Jinping have signed an agreement promoting closer cooperation in the field of defence.

President Sirisena is slated to sign two more agreements with China regarding the mega-investments done by China in Sri Lanka and providing Chinese assistance for the national security of Sri Lanka.

President Sirisena briefed his Chinese counterpart about the Easter Sunday attacks, steps taken by the government following the attacks and the new security mechanism put in place by the government.

President Sirisena said that the country does not have adequate technical expertise and equipment to trace the individuals who are fanning the flames of terrorism by propagating false information through social media.

Accordingly, the Chinese President agreed to provide the necessary technical expertise and equipment to the country at the earliest possible. He also informed President Sirisena that a Chinese technical team will be sent to Sri Lanka soon to look into the matter.

Both leaders also discussed the progress of developmental projects being implemented in the country with Chinese financial assistance. Sri Lanka President said that he expects to complete the constructions of these projects soon.

They also discussed the progress of China-assisted Kidney hospital being erected in Polonnaruwa. The Chinese President praised the cooperation given by Sri Lanka as a true ally.

The Chinese President commended the drug eradication programme of his Sri Lankan counterpart and said that he was confident Sri Lanka will be able to win that challenge.

The Chinese President has deplored the Easter attacks and expressed his condolences to the Sri Lankans affected by the terrorist activities. He added that he is against any form of terrorism in any part of the world.

Meanwhile, President Sirisena is slated to address the Conference on Asian Civilizations Dialogue today (15) and explain the current situation of the country and the positive steps to be taken for the future of the country.

The President will also explain the operations carried out by the security forces under his instructions to defeat the motives of the extremists and to strengthen the law and order situation.