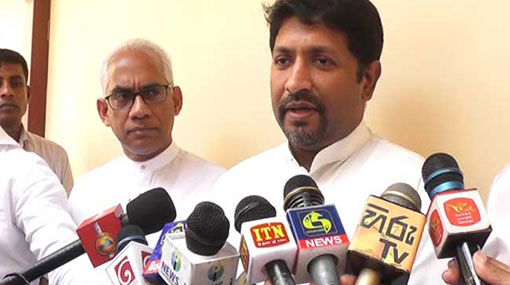 One group of persons is behind the unrest in Kuliyapitiya, Naththandiya and Minuwangoda, says Acting Minister of Defence Ruwan Wijewardene.

Speaking to media yesterday (15), he said the nine suspects, who were arrested at the copper factory in Wellampitiya and released on bail afterwards, will be rearrested if the decision to grant them has made any error.

He said 95 to 97 percent of the suspects in connection with Zahran’s group have already been arrested. Speaking further he said all terrorists in the country will be arrested in the future and emphasized that none of them will be released.

The trio had explained the current situation of the country to the chief prelates.

Addressing the media, Speaker Karu Jayasuriya said there are ‘hidden hands’ behind the incident that took place last Sunday, as well as behind the attempts the Vesak festival.

He added that these ‘hidden hands’ will be revealed in due time.