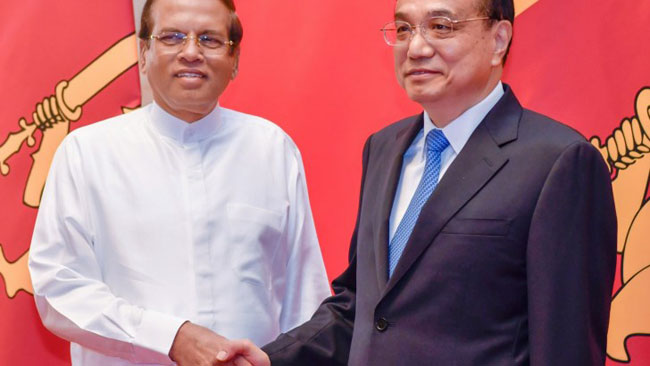 President Maithripala Sirisena returned to the island following his official visit to China to attend the Conference on Dialogue of Asian Civilizations (CDAC).

The President and his delegation arrived in the island early this morning (16), according to Ada Derana reporter.

The President also addressed the Conference on Dialogue of Asian Civilizations, which was held in Beijing on Wednesday (15th) morning.

The first session of the International Conference was held in Beijing under the patronage of Chinese President Xi Jingping, with the participation of President Maithripala Sirisena as a special invitee.

The conference aims to discuss the Asian civilizations in the interest of safeguarding mutual trust and respect among the people of the world for the sake of humanity.

The conference will be held in Beijing until April 22nd 2019.

The Chinese government has taken steps to provide a grant of Rs 2,600 million for Security Forces during this emergency situation on a request by President Maithripala Sirisena. The Chinese President has also agreed to immediately release 100 jeeps and many other equipment costing Rs. 1,500 million to the Sri Lanka Police Department.

President Sirisena briefed his Chinese counterpart about the Easter Sunday attacks, steps taken by the government following the attacks and the new security mechanism put in place by the government.

The discussion also focused on strengthening cooperation in the defence sector and sharing intelligence between the two countries.

President Sirisena said that the country does not have technological expertise and equipment to trace the individuals who are fanning the flames of terrorism by propagating false information through social media.

The Chinese President agreed to provide necessary technological expertise and equipment to the country immediately. He also informed President Sirisena that a Chinese technical team will be sent to Sri Lanka soon to look into the matter.

Both leaders also discussed on the progress of development projects being implemented in the country with Chinese financial assistance. Sri Lanka President said that he expects to complete the constructions of these projects soon.

A meeting between president Sirisena and the Prime minister of China Li Keqiang was held at Beijing yesterday (15th). Then, China’s Prime Minister also stressed that China is firmly in touch with Sri Lanka in the fight against terrorism.

After one year a number of tourists from China are reaching Sri Lanka and one of the most profound investment opportunities will be carried on by China.

Managing the political circumstance emerged as the leader of the state, the security of the parties that have invested and hope to invest in Sri Lanka in the  future and the security of the tourists are to ensured where the President discussed the decisions on behalf of that.