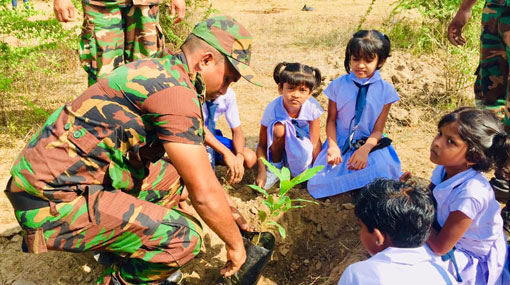 The mega reforestation project, organized by the Sri Lanka Army and ‘Manusath Derana’ in a joint effort to mark the completion of a decade since the Humanitarian Operations against LTTE terrorism, has commenced this morning (18) at Marichchakaddi in Wilpattu.

The inaugural ceremony was set off following the arrival of Lieutenant General Mahesh Senanayake, Commander of the Army, near 46th Mile Post at Marichchakaddi and it has been joined by a large gathering of Army personnel, civil activists and ‘Manusath Derana’ teams.

Parallel tree planting campaigns are also slated to be launched at Palasothikandal, Karadikkuli and Srinath Nagar areas during the course of the day, under the Army’s ‘Thuruliya Wenuwen Api’ project.

Manusath Derana and the Sri Lanka Army cordially invite the public to join the effort for reforestation of Wilpattu.