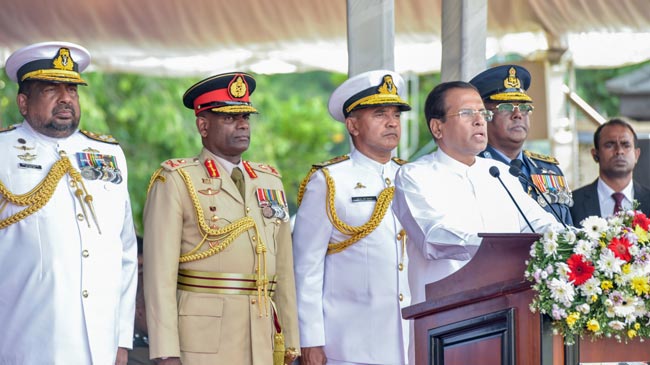 Troops should use their experience to fight against Islamist terrorists - President

President Maithripala Sirisena on Sunday asked the security forces to use their experience in defeating separatist Tamil guerrillas a decade ago to meet the new challenge from Islamist militants linked to ISIS and responsible for last month’s serial bombings that killed 258 people.

Addressing the ‘National War Heroes Day’ to mark the 10th anniversary of the government’s victory against the LTTE, Sirisena also said that he has full confidence in their (defense forces’) ability to defeat such threat, “which is not only limited to Sri Lanka but has become international”.

At least 100,000 people were killed in the conflict between Sri Lankan forces and the Liberation Tigers of Tamil Eelam (LTTE). Thousands of people, including security personnel, are still reported to be missing after the war.

According to the Army, 27,000 soldiers lost their lives in the war.

The 10th anniversary falls nearly a month after Easter Sunday bombings, the worst terror attack in the country that killed 258 people and injured over 500 others.

“We were enjoying 10 years of peace when most unexpectedly this terror group launched the attack last month,” Sirisena said, referring to the serial suicide attacks on three churches and as many hotels by a local Jihadi group, the National Thowheed Jamaath (NTJ) on the Easter Sunday.

“Nearly 300 of our own citizens and foreigners died in the attack. It is now up to our forces to face this threat and eliminate it. I have the fullest confidence in their ability,” Sirisena said, adding this is not an issue limited to our country but an international threat.

“Sri Lankan troops are enriched with experience in the fight against the LTTE to end their 30-year campaign for a separate Tamil state in the north and east,” the President said.

Remembering the anti-LTTE campaign run by the military Sirisena said that our friendly state, India sent its troops to fight the LTTE, but they met with limited success.

Sirisena remembered the fallen war heroes at the ceremony and awarded the Parama Veera Vibhushana Medals to them and conferred on them the national hero status.

The Ministry of Defense also asked the citizens to light a lamp remembering the fallen heroes.

On Saturday, thousands of Tamils in Northern Sri Lanka observed the 10th anniversary of the brutal civil war between the government and LTTE by lighting oil lamps and remembering those who lost their lives in the over three-decade-long conflict.