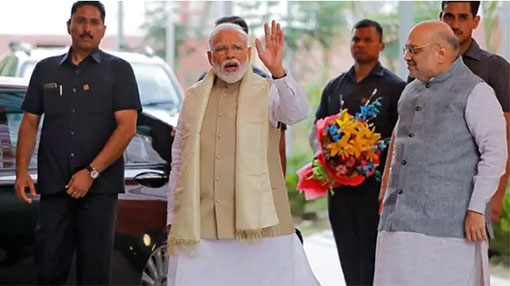 With the BJP headed for a phenomenal win in the Lok Sabha elections, Indian Prime Minister Narendra Modi on Thursday attributed the victory to the country.

Modi, who is set to enjoy his second straight term as the Prime Minister, said India has won again.

“With all+ development for all+ everybody’s confidence = victorious India,” Modi tweeted. “Together we grow. Together we prosper. Together we will build a strong and inclusive India. India wins yet again,” he said.

If the trends stay until final results, the BJP will surpass its 2014 tally when it had won 282 seats on its own in the 543-member Lok Sabha. Adding the seats won by its allies, the BJP-led National Democratic Alliance could win 343 seats, up from 336 in 2014.

Senior BJP ministers and alliance partners credited Prime Minister Narendra Modi and Amit Shah for the victory described by many as a “tsunami”. BJP president Amit Shah Thursday hailed the party’s superb showing in the Lok Sabha polls as “victory of India” and said it is people’s mandate against the Opposition’s propaganda and personal attacks as well as their total rejection of politics of dynasty, appeasement, and casteism.

In a series of tweets, Shah said this victory is a “win of people’s confidence in Prime Minister Narendra Modi”.

Senior ministers Rajnath Singh, Sushma Swaraj, Suresh Prabhu, and Ramvilas Paswan were among those who credited Modi for the stupendous electoral triumph.

Meanwhile, Opposition leaders too congratulated the BJP on its victory. West Bengal Chief Minister Mamata Banerjee congratulated the winners, adding that “all losers are not losers.” Taking to Twitter, Mamata sought for a complete review of the results before sharing her views on the trends.

Former J&K chief minister Mehbooba Mufti conceded defeat from the Anantnag constituency and said it was time for the Congress “to get an Amit Shah” “Congratulations to Narendra Modi ji for a historic mandate. Today surely belongs to BJP and it’s allies. Time for Congress to get an Amit Shah,” she tweeted.