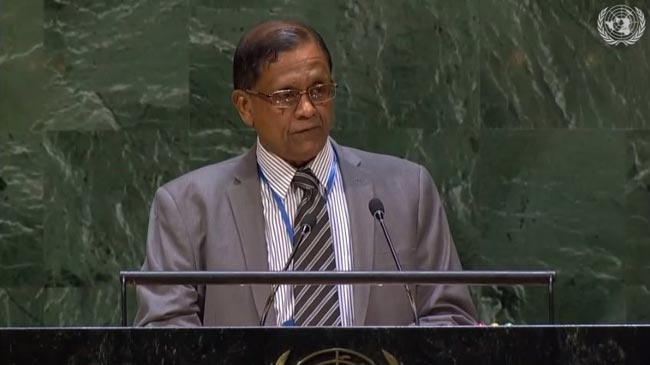 Responding to the joint statement issued by the United Nations (UN) Special Advisor on the Prevention of Genocide Adama Dieng and UN Special Advisor on the Responsibility to Protect Karen Smith, Sri Lanka’s Permanent Representative to the UN in New York Ambassador Dr Rohan Perera stated that Sri Lanka was taken aback by their oversimplified narrative of events that are nuanced and complex in nature.

The Ambassador stated that their prejudiced statement only serves to sensationalize issues at a time the government is taking stringent measures to maintain law and order and quell unrest in the interest of the safety of all.

He says that it skews the situation on the ground and interprets post-April 21 events through a narrow prism of stereotypical labels while disregarding the deeper and more nuanced issues at play.

Following is the full text of the response:

The Government of Sri Lanka has carefully reviewed your joint statement of 13 May 2019, issued as a note to correspondents, where you have expressed alarm on the ‘growing acts of violence on the basis of religion’ in Sri Lanka. While noting your concerns, we were taken aback by your oversimplified narrative of events that are nuanced and complex in nature.

For the past decade, the people of Sri Lanka had been enjoying their hard-won peace and freedoms, and had embarked on the arduous path of reconciliation and national healing after nearly three decades of struggling against separatist terrorism. As has been perpetrated by ruthless terrorist groups inspired by ISIL/ Da’esh with global reach in many parts of the world, the horrendous Easter Sunday attacks were intended to create division among us and destroy the very fabric of our multi-ethnic, multi-religious and multi-cultural society, and deal an intentional blow to our economy. All peace-loving citizens of Sri Lanka are still trying to come to terms with the shock and aftermath.

While we mourn the loss of innocent lives, the support and solidarity from our friends in the international community, including the UN Secretary-General, have been overwhelming. We were reminded that we are fighting a common adversary in terrorism, and its associated manifestations of radicalization and violent extremism, which had taken many innocent lives from across many parts of the world in recent times.

In this context, it is quite insensitive and ill-conceived that you did not consider it important to share your concerns with the Sri Lankan government first, before going public with your statement. This would have also been in keeping with the key objectives of your respective mandates, i.e. to provide early warning and advocacy. We are particularly disappointed that your statement comes at a time when Sri Lanka has been following a well-acknowledged open and constructive engagement with the UN System and its human rights mechanism, including with the special procedures and mandate holders for the past several years. Eight such Special Procedures have visited Sri Lanka in the last four years which ranked among a handful of countries with regard to accommodating such engagement. In this context and spirit, we would have welcomed any constructive criticism or observation from your offices as well. Your prejudiced action only serves to sensationalize issues at a time the government is taking stringent measures to maintain law and order and quell unrest in the interest of safety of all.

I am constrained to state that your statement demonstrates a limited understanding of events and is an expression of preconceived opinions. By stating that “the special advisors noted a recent spate of attacks against Muslim and Christian communities in Sri Lanka, a majority Buddhist country”, and continuing that “the recent violence in Sri Lanka has highlighted a growing influence of nationalists and extremist views of identity in the Asia Region, putting religious minorities at risk”, your statement generalizes events and mischaracterizes facts, which is irresponsible as it is dangerous, and does not conform with the independent nature and credibility of your offices.

Indeed, even the conflation of the Easter Sunday attacks that killed over 250 of our loved ones, mostly from Sri Lanka’s Catholic community, as well as 45 foreign visitors to Sri Lanka, and the swiftly quelled communal violence during the weekend of 11 May, is unexpected from your august offices. It was made manifestly clear that the world recognized that the Easter Sunday attacks were carried out by Islamic fundamentalists, having been influenced and inspired by ISIS, and were not a result of any local conditions. These attacks, mainly against Christians at prayer, form part of global trends of radicalization and extremism.

The almost two and half million Muslims who comprise about 10% of the 22 million population of Sri Lanka have lived in harmony amongst the Buddhist majority (over 70%) and other groups for over several centuries. Even amidst the gravest provocations during the 30 years separatist terrorist armed conflict in Sri Lanka, where sacred Buddhist and Islamic religious places were attacked and devotees butchered, religion has not been a cause for violence. Hence, the above statement skews the situation on the ground and interprets post-April 21 events through a narrow prism of stereotypical labels, while disregarding the deeper and more nuanced issues at play.

It is pertinent to place on record that a number of precautionary measures were put in place by the government immediately following the attacks, such as, providing additional security protection to all places of worship, limiting access to social media to halt the spread of false information for brief periods of sensitivity, and banning full face covering that hinders identification. It is regrettable that, in spite of these measures, a handful of isolated incidents broke out in some parts of the country causing the tragic death of one person. Within a few hours, the Government took swift action to thwart any escalation of violence and perpetrators were promptly arrested and subject to due process.

Sri Lanka is indeed a ‘pluralistic society’, and freedom of religion or belief, freedom of movement within the country and choice of residence has been guaranteed by the Constitution. Considerable work has been undertaken by the Government also with the support of the UN system to preserve inter-faith and inter-religious harmony and inclusivity, to which you too have alluded. This was amply demonstrated when there were calls made not only by political leadership but also by the Archbishop of Colombo and other Buddhist, Hindu and Islam clergy, for peace and non-violence among communities.

Wittingly or unwittingly, one should be careful not to contribute to diminishing the enormity of the acts of terror that shook Sri Lanka, to a domestic scuffle between religious bigots, or taint it as a result of “local discriminatory practices that perpetuate religious intolerance and violence”, which is furthest from the ground reality. Given that this is clearly an offspring or part of global terror network, better understanding and solidarity of all partners are of essence to eradicate this menace. Ill-timed statements from responsible authorities will only serve to strengthen the hands of parties with vested interests and extremist elements determined to veer Sri Lanka from the path of peace and development. The need of the hour is for measured advice and support of experts of your good offices to help clarify matters in order for Sri Lanka and all her people to face new challenges arising from violent extremism.

We seek your understanding and support at this difficult time for our country and all its people.