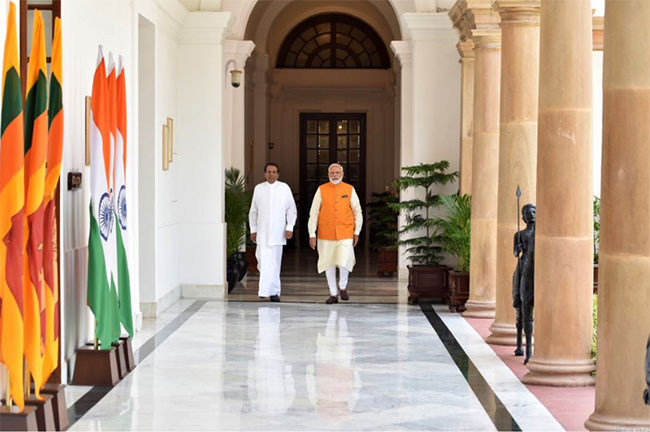 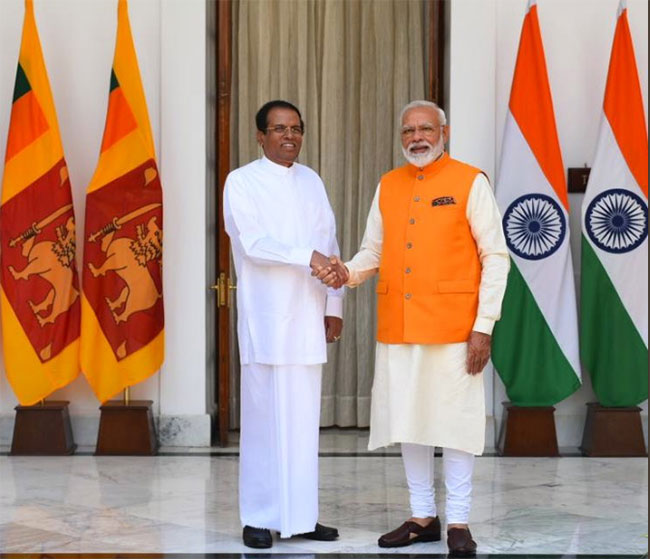 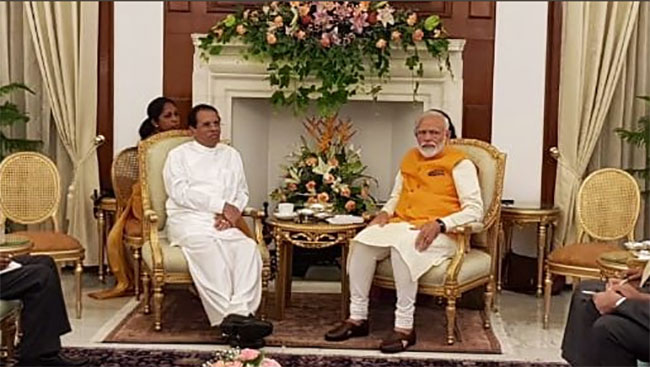 A day after after being sworn in with his 57-member council of ministers by President Ram Nath Kovind, Indian Prime Minister Narendra Modi on Friday held a bilateral meeting with Sri Lankan President Maithripala Sirisena.

In the first of a series of bilateral meetings with foreign leaders, Modi and Sirisena discussed issues of interest of the two countries at Hyderabad House in New Delhi.

Sirisena congratulated the Prime Minister on the re-assumption of Office following the resounding victory of his Party in the recently-held General Elections and reiterated his desire to work together to strengthen relations between the two countries for peace, prosperity and security in our region.

Prime Minister Modi warmly thanked President Sirisena for his gesture of attending the Ceremony and also for his good wishes. He conveyed his government’s continued commitment to further foster friendly bilateral ties with Sri Lanka.

The leaders noted that terrorism and extremism continue to pose a threat to humanity and committed to closer bilateral cooperation for peace and security in South Asia and the Indian Ocean region, Devdiscourse reported.

“Hitting the ground running! In the first of a series of bilateral meetings with foreign leaders lined up today, PM Narendra Modi had a warm meeting with the President of Sri Lanka Maithripala Sirisena at Hyderabad House. Discussed bilateral issues of interest,” Indian Ministry of External Affairs spokesperson Raveesh Kumar tweeted.

Following the meeting, President Sirisena tweeted: “My pleasure to meet PM Narendra Modi as he is entrusted to lead India for another term. Our bilateral meeting was very successful and covered many areas including making South Asia stronger and more secure. Looking forward to welcome you in Sri Lanka soon.”

Modi is slated hold more bilateral meetings with leaders of the Bay of Bengal Initiative for Multi-Sectoral Technical and Economic Cooperation (BIMSTEC) countries along with the Presidents of Kyrgyzstan and Mauritius.

The BIMSTEC leaders on Thursday witnessed the swearing-in ceremony at the Rashtrapati Bhavan here.