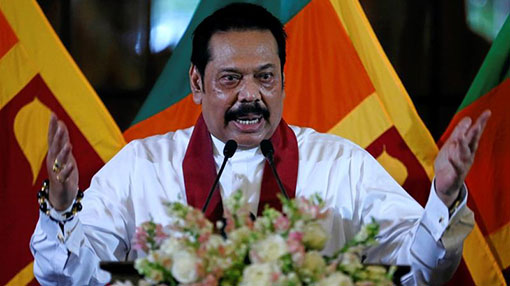 Mahinda Rajapaksa on why Muslim extremism spread throughout Sri Lanka

Opposition Leader Mahinda Rajapaksa says that everything seen happening in the country now, such as the recent attacks on Muslim-owned businesses and the resignation of Muslim ministers, is directly connected to the presidential election that is due to be held in a few months.

He charged that the present government is seeking to retain for the next presidential election as well, the Muslim vote base that they organised around themselves “using various stratagems” before 2015.

Delivering a speech at his official residence in Colombo, Rajapaksa said that opposition MPs tabled a no-confidence motion against one Cabinet minister on the grounds that he had connections with the terrorists responsible for the Easter Sunday attacks.

He said no confidence motions are an integral part of the parliamentary tradition and a right exercised by the parliamentary opposition and that when tabled in Parliament, it can either be debated and a vote taken, or the Minister concerned can resign and resume his portfolio if he is cleared of the charges.

He said that is a tradition that applies to all members of Parliament regardless of their ethnicity or religion. He said no-confidence motions had been tabled against Muslim Speakers like M.A. Bakeer Markar and M.H. Mohamed in the past, but that nobody looked at them in religious or ethnic terms at that time.

“This time however, when a no confidence motion was tabled against one Muslim Minister, all Muslim ministers in the government resigned.”

“This seems to be ploy on the part of the UNP government to organise and line up all Muslim politicians on one side and to obtain the Muslim vote at the forthcoming presidential elections,” he alleged.

The former President said that the en masse resignations have resulted in the opposition’s no-confidence motion being rendered void and that since public attention has been distracted by the mass resignations, the government has managed to “sweep many other issues under the carpet”.

“There is now no talk about extremists. The searches have stopped. The discovery of weapons has ceased. There is no talk of the steps being taken with regard to the terrorist suspects arrested.”

“Thus, the government has killed about a hundred birds with one stone,” he said.

“They don’t care where their votes come from.”

“The Muslim leaders for their part, want a government they can manipulate at will. But this confluence of interests will not solve the problem that the ordinary Muslims of this country face today,” he said.

The Opposition Leader said that Buddhists, Hindus and Christians are joining hands in a common endeavour against that terrorism and that moderate Muslims should not be isolated from this unity of purpose that is being forged.

He said that Muslim religious leaders and intellectuals have admitted that as a result of the extremist ideologies that came into this country from outside, the Sri Lankan Muslim community had gradually isolated themselves from the rest of Sri Lankan society.

“Due to the emergence of exclusively Muslim political parties from the 1980s onwards, Muslims isolated themselves in the political sphere as well. The en masse resignation of Muslim Ministers marks a high point in this process.”

Rajapaksa said that even M.H.M. Ashroff, who was the first to form an exclusively Muslim political party, later realised his mistake and towards the end he formed a political party that was open to all communities called the National Unity Alliance. “But after his death, this trend towards integration stopped and the isolationist trend gained momentum.”

He added that due to the fact that Muslim political leaders are completely dependent on the Muslim vote, they need the votes of the extremists within their community as well.

The Opposition Leader stated that Muslim extremism spread throughout the country because the Muslim leaders were unable to oppose it.

“There is the oft heard charge that the Muslim leaders speak of reconciliation in Sinhala but spread the message of communalism in Tamil. Islamic extremism has gained traction in this country due to that kind of politics,” he claimed.

Rajapaksa further said that the spread of extremist ideologies among the Muslim population in this country did not take place all of a sudden and that it took place over a number of years, in the midst of heated debates, threats, exchange of fisticuffs, the burning of mosques, the burning of houses and even murder.

“Even in the midst of all that, Muslim political leaders provided patronage to the extremists and allowed them to flourish,” he said, adding that after the Easter Sunday bombings, Muslim leaders said that they never thought something as serious as this would happen.

“Be that as it may, we now have to find a solution for what has happened. The people of this country will never tolerate terrorism. This extremist terrorism will have to be destroyed by whatever means necessary.”

“Anyone who says that terrorism can be crushed without such measures, is not being truthful.”

“Adherents of other religious live in large numbers in most Muslim majority countries and they are secure to the extent that religious extremism has been suppressed in the country concerned,” he pointed out.

As in the case of Sri Lanka, religious extremism is the biggest enemy of the worldwide Muslim community, he stressed. “This is the main tool used by imperialists to destroy Muslim countries.”

Rajapaksa said that imperialist powers have already destroyed Afghanistan, Iraq, Syria, Libiya and Yemen by promoting religious extremism in those countries. He said that the extremist terrorism that has now come into this country will not do the local Muslim community any good.

“I hope the danger of isolating local Muslims from other communities in this country would have dawned on our Muslim leaders at least at this late stage.”

The Opposition Leader said that all other communities must get together and protect the moderate Muslims at this juncture and that every Muslim for his part should use his own reason and eschew narrow religion based politics.

He said that change should come from within the Muslim community. When the people of different communities in this country are uniting against terrorism, we expect the moderate Sri Lankan Muslim community to join them, following the example set by the vast majority of the global Muslim community, Rajapaksa said.

“I wish to emphatically state before the people of Sri Lanka that terrorism will not be allowed to exist in this country under a government led by me,” he said in conclusion.