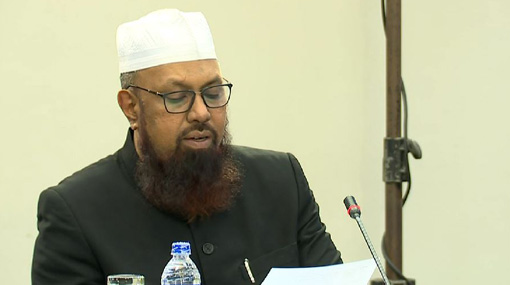 Since 2015, the security forces were informed of the links that the National Thowheed Jama’ath organization had with the IS, says M. I. M. Rizwi (Mufthi), the chairman of All Ceylon Jamiyyathul Ulama (ACJU).

Former Defence Secretary Hemasiri Fernando was warned of the activities of the National Thowheed Jama’ath organization since January 13th this year, he added.

The ACJU chairman stated this testifying before the Special Parliament Select Committee appointed to probe the terrorist attacks on the 21st of April.

Further testifying, the ACJU chairman stated that he was criticized by the NTJ for expressing his views against the Islamic State.

He emphasized that the Islamic State has not done anything for the sake of the Muslim community and a ‘real Muslim’ person would never prove loyalty to the IS.

The Is and other terrorist organizations have misled the youth in order to fulfil their goals and in Sri Lanka, there are only less than 500 youths who are inclined to such extremist ideologies, the ACJU chairman further stated testifying before the committee.