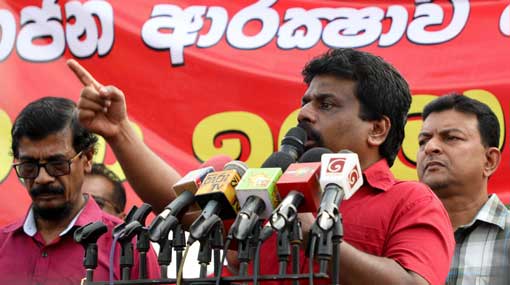 Janatha Vimukthi Peramuna (JVP) led a protest in front of the Fort Railway Station this evening (12) demanding the ‘traitorous’ government to step down.

JVP Leader Anura Kumara Dissanayake, addressing the protesters, stated that the leaders who failed to ensure the public security do not have the right to be in power anymore.

He alleges that the Prime Minister attempts to divert the accusations levelled at him towards the President.

The Ranil-Maithri Government should step down but that does not mean it paves the way for Mahinda Rajapaksa, says the JVP leader.

Further commenting, he claimed that most political parties are manipulated by the US and the Indian embassies.

The slogans of the banners carried by the protestors read, the government that led the country to anarchy and betrayed public security should step down forthwith.