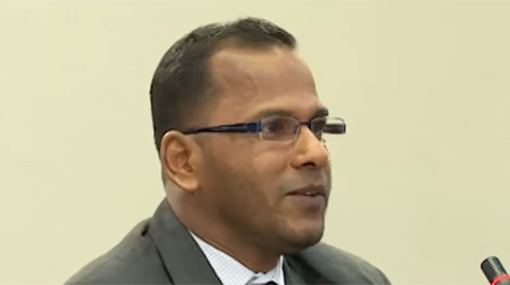 M.L.A.M. Hizbullah had been engaged in politics for nearly 30 years and Kattankudy was Arabized during the time period when he was in office, stated Attorney-at-Law Abdul Uvaiz, the chairman of Muslim Mosques and Muslim Federation in Kattankudy.

He stated this testifying before the Special Parliament Select Committee probing the Easter Sunday carnage.

The committee is scheduled to convene today as well. Accordingly, former IGP N.K. Illangakoon and former Eastern Province Governor M.L.A.M. Hizbullah have been summoned to testify before the committee.

The testimony of Mr Uvaiz is as follows:

“Zahran Cassim hailed from a poor background. He has completed only up to grade 5. He was enrolled as a student of the Jamiyyatul Falah Arabic College in Kattankudy.

But owing to his bad character, he was expelled by the board of administration in 2005.

He gradually started his insidious speech in 2006. Following that he started propagating that Muslim students should not stand up for or respect the national anthem.

Zahran went to Japan and following his return, he started working for the same organization. But as a dispute had arisen between him and its members. Then he was removed from the organization. It was after this incident that he established the National Thowheed Jama’ath.

On 10th March 2017, Zahran commenced a campaign against those who bore different ideologies from his. Zahran’s followers used knives and swords. He wasn’t arrested.”

Responding to a question regarding the name boards in Kattankudy being displayed in Arabic language, he said the Arabic is learnt for the purpose of understanding the Quran. “But you don’t need to display it on the road and make it Arabized,” he added.