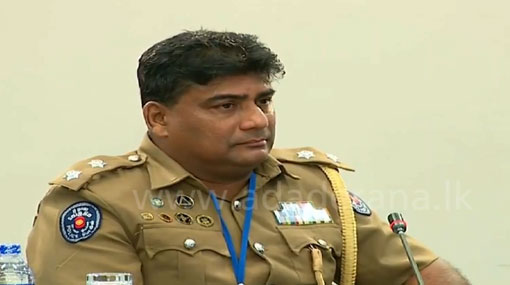 The OIC said, after assuming duties in Kattankudy area, he had learnt that a case was being heard before the court against Zahran Hashim and several other persons. The Zahran, his brother Rilwan and a third person by the alias ‘Army Mohideen’ who were named as defendants of the case had absconded the court and fled the area.

There had not been any protests or complaints against these people at that time, however, before that, when Zahran had been residing in the area, violent incidents had been reported on every Friday, following Muslim prayer sessions, the Kattankudy OIc further said.

According to him, Zahran had been the one who led these activities.

There had been a clash between Zahran’s group and another mosque in the area and thirteen individuals were arrested over the incident while Zahran, Rilwan and ‘Army Mohideen’ had fled the area, he added.

Responding to the committee members’ question regarding issuing warrants on the escapees, OIC Kasthuriarachchi said, “Warrants were issued on these three suspects on a day-to-day basis. Several petrol bombs were also seized over the incident. Until the Government Analyst’s report on the matter was received the submissions were presented to the court through a B-report. However, an open warrant was not issued on them. They had absconded the court on several occasions. Their residing places were not confirmed either.”

The committee alleged OIC Kasthuriarachchi that no action had been taken despite the protests and the complaints of the residents in the area. In retaliation, investigations were conducted within his jurisdiction on the matter, yet no information was received on them. “If they had been there, the residents of the area would definitely have informed the police.”

Zahran and the group had not been active in the area after he assumed duties in the Kattankudy police division, OIC Kasthuriarachchi assured, testifying before the committee.

The 13 suspects, who were under arrest over the clash with another mosque, were released on bail nearly a year after they were arrested in 2017, he said.

The suspects including Zahran’s father and younger brother had reported to the Kattankudy Police at the end of every month complying with the court order, according to OIC Kasthuriarachchi.

The committee inquired into the charges that were laid against the said suspects. He said they were charged for engaging in violent activities as well as the petrol bomb attack.

The committee then went on the question him whether the Kattankudy police officers had links with such extremist group, which he denied.

The 13 suspects, who were bailed over the petrol bomb attack, were later arrested for their alleged involvement in the Easter Sunday attacks, OIC Kasthuriarachchi said. “It was revealed that they had trained with Zahran Hashim,” he further said.

“On April 17th, an individual had filed a complaint stating that a motorcycle has gutted in fire at a 43-acre land plot owned by him. Upon inspecting the site, the police had uncovered that the fire was caused by an explosion. The Government Analyst’s report on the chemicals used by for the said explosion his yet to be received,” he said.

The Kattankudy OIC said their involvement in terrorist activities did not concern Kattankudy area but it was done in Nuwara Eliya and Hambantota areas. Responding to this, committee member, Field Marshal Sarath Fonseka pointed out that the bailed suspects reporting to the police once a month is a failed system if they are not under surveillance after they were granted bail.