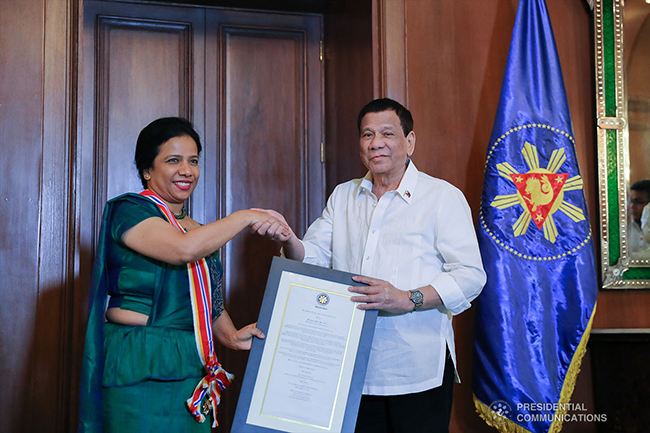 The Order of Sikatuna - the national order of diplomatic merit, with the rank of Grand Cross (Datu) gold distinction, was awarded to the Sri Lankan envoy for her major contributions in strengthening and deepening of relations between the Philippines and Sri Lanka, as well as for her role in facilitating the state visit of Sri Lankan President Maithripala Sirisena to the Philippines last January.

She was also commended for opening a new chapter of enhanced and robust Philippine-Sri Lanka cooperation most notably in agriculture, defense, higher education, and tourism, as well as for her commitment to elevate Philippines-Sri Lanka bilateral dialogue on issues of common interest including the Philippine-Sri Lanka political consultations in 2016 and 2018.

Also, she worked to bring closer together Filipinos and Sri Lankans in greater friendship, understanding, and mutual respect, a statement said.

Before her appointment as Sri Lanka’s ambassador to the Philippines, Ambassador Ranaraja served for 22 years in different capacities both at the Ministry of Foreign Affairs and several Sri Lankan embassies.

She was designated Ambassador Extraordinary and Plenipotentiary of Sri Lanka to the Philippines in November 2015, her first ambassadorial level appointment.

She also had stints at Sri Lanka’s embassies in Belgium and the European Union, Thailand, Russian Federation, and Italy. She also served as the Director General for Africa in the Ministry of Foreign Affairs in Colombo.

Sri Lanka’s Minister of the Embassy Thanuja Dissanayake was also present during the Palace event. (PND)