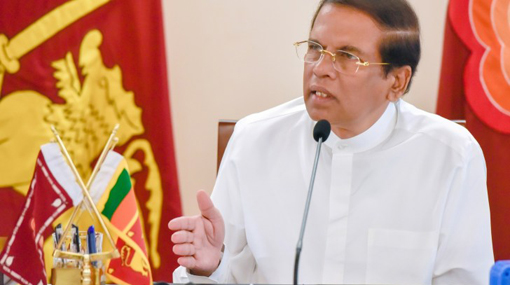 The 19th Amendment to the Constitution is the cause of current political instability in the country, President Maithripala Sirisena has said.

Addressing the heads of media institutions at the President’s House in Colombo today (26), the President has emphasized that the 19th Amendment has created two leaders in Sri Lanka.

He pointed out that Prime Minister Ranil Wickremesinghe has also stressed on the fact that there should not be two drivers for a vehicle of government.

Whoever wins the upcoming Presidential Election should take measures to abolish the 19th Amendment to the Constitution, the President has further said.

However, the President has remarked that abolishment of the 19th Amendment before the next Presidential Election would be the best for the country.

Pointing out that the 19th Amendment to the Constitution is a curse to the nation, the President disregarded it as a need of the non-governmental organizations.

The country does not need a new Constitution, says the President. It is possible to abolish the 18th and 19th Amendments to the Constitution and adapt the previous Constitution, he further said.

The President said he supported the 19A in 2015, because of the imperative need to restore democratic freedoms, the establishment of independent commissions, individual freedoms and media freedom.

The President has highlighted that he is completely against the proposed Status of Forces Agreement (SOFA) with the United States of America.

“I don’t know whether the 19th Amendment to the Constitution was prepared by constitutional experts or whether it was done by some political ‘makabas’,” President Sirisena questioned.

“Despite whoever comes to power without abolishing the 19th Amendment, there will be two governments in the country; one that is controlled by the Presidential Secretariat and another by the Temple Trees,” President Sirisena claimed.

During the meeting, the President revealed that has signed the documents for execution of four big time drug operators currently convicted and awaiting death sentence. He said that the convicts and their next of kin yet to be informed. These four death penalties will be carried out soon, he added.

Speaking further, the President has called the Special Parliamentary Select Committee is a ‘drama’ scripted by the Temple Trees.

Underlining the fact that he was not called before the Parliamentary Select Committee, the President stresses he would never testify before the committee even if he is summoned.

Pointing out that there are about 100,000 drug addicts in the country, the President has urged all sections of the society including media to extend fullest support to the government endeavours against illicit drugs.

Referring to the security situation and operations during the post-Easter Sunday attacks, he has said that emergency rule has been extended for another month to facilitate continuation of investigations against arrested suspects and to continue deployment of security forces for security operations to ensure safety of the citizens.

The President has pointed out that many embassies also sought military security. Furthermore, until the formulation of new regulations for law enforcement, it is necessary to continue with emergency laws, the President continued.

“We had to declare an Emergency situation to suppress terrorists and ensure a peaceful environment in the country. What have been enacted by gazette are clauses pertaining to suppressing terrorism only,’ he has said.

Replying to a question, he has stressed that the campaigns to boycott Muslim shops would not succeed and recalled that similar campaign to shun Indian products in the past had failed. “It is very important that peace and harmony among Sinhala, Muslim and Tamil communities prevail. It is important for us to foster trust among us.”