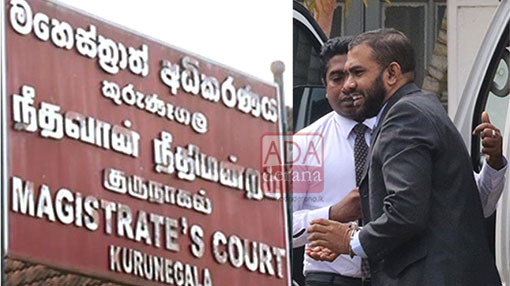 The case against Dr. Shafi, who is accused of allegedly amassing assets through suspicious means, performing illegal sterilization surgeries and having links to terrorist activities, was taken up for hearing today (11).

He was produced before the Kurunegala Magistrate Sampath Kariyawasam by the officers of the Criminal Investigation Department (CID) this morning.

Deputy Solicitor General Thusith Mudalige informed the Kurunegala Magistrate’s Court that the three-month detention order against Dr. Shafi has been withdrawn as the evidence presented against him was inadequate to prove that he was linked to terrorist activities.

Speaking on behalf of the Attorney General, Deputy Solicitor General Thusith Mudalige said the three-month detention order against Dr. Shafi was withdrawn yesterday (10) after the Ministry of Defence was informed that the evidence against Dr. Shafi was inadequate to prove that he had received funds from a terrorist organization to promote their activities.

The deputy solicitor general continued that the charges laid against Dr. Shafi for allegedly accumulating assets via suspicious means are being investigated further.

He stressed that any claim, which can be proven beyond a reasonable doubt that Dr. Shafi had committed offences that violate the Prevention of Money Laundering Act, have not come up as of yet, however, investigation on the matter are currently underway.

The deputy solicitor general further told the court that statements should be recorded from nearly 850 mothers, who had lodged complaints stating that Dr. Shafi performed suspicious caesarean sections on them. Speaking further he said a complete investigation has to be conducted after obtaining the Bed Head Tickets (BHT) of the patients.

He pointed out that a report should be prepared on the complications that emerged during the caesarean section performed by the other obstetricians at the Kurunegala Teaching Hospital.

He requested the court to issue an order mandating the SHG test for the 147 mothers who reported that they experienced complications in conceiving for over two years after getting treated by Dr. Shafi.

The magistrate subsequently stated the further investigations would be hindered if any complaint against Dr. Shafi has been withdrawn.

In response, the Director of Kurunegala Teaching Hospital and the Assistant Superintendent of Police of the CID said that no complaint has been withdrawn thus far.

In this backdrop, over 1000 complaints were lodged at Kurunegala Teaching Hospital and Dambulla General Hospital by mothers who claimed to have been treated by Dr. Mohamed Shafi and experienced complications in conceiving.