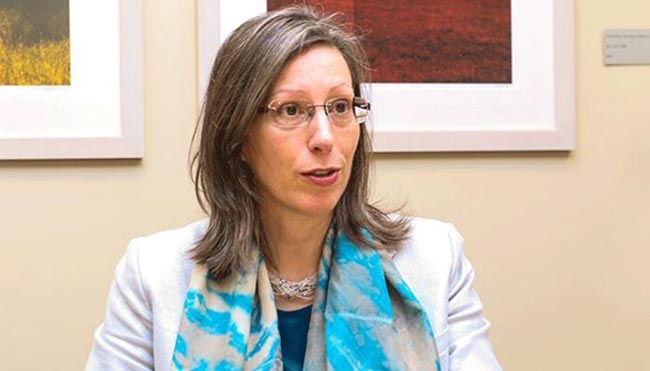 US govt. will not buy, sell, or own actual land in Sri Lanka  Teplitz

The United States Government will not buy, sell, or own any actual land under Millennium Challenge Corporation (MCC) Compact, according to the United States Ambassador to Sri Lanka.

The US Ambassador to Sri Lanka Alaina B. Teplitz conducted a Facebook live chat last afternoon (17), on countering misinformation and disinformation that has been propagated about US-Sri Lanka cooperation.

The VFA addresses the status of US military and civilian employees of the US Department of Defense, who may be temporarily present in Sri Lanka for exercises or official duty at the invitation of the Government of Sri Lanka, clarified the Ambassador. However, the draft VFA is still under negotiation and has not been concluded as of yet, she stated.

According to the Ambassador, the VFA reflects the fact that the US has no plans for a permanent military presence in Sri Lanka and that the US Forces would only come to Sri Lanka at the invitation of the Sri Lankan government and would then depart.

Ambassador Teplitz further assured that no troops - even under a VFA - would enter Sri Lanka without proper documentation and prior approval. Sri Lanka would retain all sovereign rights to approve or deny entry or exit of U.S. personnel, vessels, and aircraft into Sri Lanka’s territory and territorial waters/airspace, she elaborated.

Responding to a concern about the terms of the SOFA (or VFA) on possible immunity US defense personnel seek from the local jurisdiction, the Ambassador said that the two countries would come to an advance agreement on how to deal with such incidents should they arise.

The second agreement between the two countries, Acquisition and Cross Servicing Agreement (ACSA), was signed in 2007 and renewed in 2017, and aim to facilitate military cooperation, particularly joint exercises and disaster relief, informed the Ambassador.

According to the Ambassador, the Millennium Challenge Corporation (MCC) Compact is a $480 million development assistance gift designed to promote economic growth in Sri Lanka and is not contingent on the VFA and ACSA.

The MCC is neither a loan nor a military agreement, she added.

The US has no intention to build a military base or establish a permanent military presence in Sri Lanka; similarly, the United States gains no land ownership or control through MCC, she said.

She further stated the MCC Compact would not be establishing an ‘economic corridor’ between Colombo and Trincomalee.

Instead, under the MCC, two projects - a transportation project and a land project – have been proposed to address constraints to economic growth in Sri Lanka.

The $350 million transportation project will upgrade physical roadway networks, modernize traffic systems, and introduce policy and regulatory reforms. With an estimated economic rate of return of 19%, the project will focus on the Western, Central, Sabaragamuwa and Uva Provinces.

The $67 million land administration project has an estimated economic rate of return of 30% and aims to expand and improve the existing initiatives of the Sri Lankan government to increase the availability of spatial data and land rights information. The project will initially focus on districts in the Central, North-Western, North-Central and Eastern Provinces.

Responding to a query on US’ involvement in Sri Lankan judiciary and protocol, the Ambassador said that the US has not and will not interfere or become directly involved in Sri Lanka’s judiciary.

However, the US has sponsored training for Sri Lankan judges and lawyers at the request of the Sri Lankan government, she stated.

The American Bar Association (ABA) has no intention to establish a branch in Sri Lanka, said Teplitz.

The US Ambassador to the island reiterated that when the US extends support and assistance to the people of Sri Lanka it is only at the invitation of the Sri Lankan government.