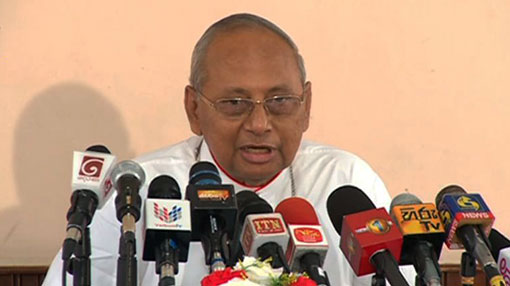 Archbishop of Colombo, Malcolm Cardinal Ranjith, says that he will not meet any Presidential Candidates if the reports Easter Sunday terror attacks are not handed over.

Speaking at a press conference at the Bishop’s House in Colombo today (31), Cardinal Ranjith said that more than 3 months have passed since the terrorist attacks which shocked the entire nation and impacted the economy.

He stated that the victims and the people affected by these suicide bombings are still suffering and that he always tries to comfort them every way possible.

Cardinal Ranjith stated that they don’t want compensation and that what they seek is justice. He also charged that those who were behind the devastating attacks as well as those who knowingly ignored intelligence received in advance, are still roaming free without being punished.

Justice has still not been served on this matter, he said. Not only the ruling party, but the opposition is also completely responsible for these attacks, the Archbishop of Colombo vented.

He further stressed that what is expected at this hour is not for certain individuals to ‘gain points’ for themselves and that everyone should join together to take appropriate actions as brothers.

“However, there was no strong influence from the opposition,” he said, adding that so far no reports have been seen by the people.

He said that a commission comprised of unbiased individuals has still not punished those responsible and that there is no impartiality or transparency to be seen.

Cardinal Ranjith said that an independent commission is essential before talk about any elections. “We don’t want elections. We want the truth.”

He urged the county’s politicians to first do what must be done and warned that they cannot save themselves by handing out money.

Cardinal Ranjith also said that certain media try to place ‘labels’ of political parties on him, and he requested them not to turn him into a ‘political paw’.

More than 250 people were killed and 500 others sustained injuries when multiple coordinated explosions, carried out by local jihadist group National Thowheeth Jamaath (NTJ) linked to the Islamic State (IS), rocked three luxury hotels and three churches on April 21, this year.

The head of Sri Lankan Roman Catholic Church has previously called for the government to step down due to its alleged failure to prevent Easter Sunday bombings.