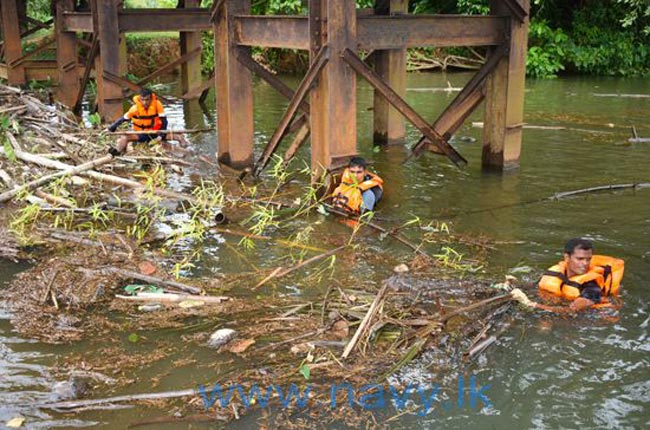 Sri Lanka Navy, as a precautionary measure of averting possible floods during the rainy season ahead, removed logs and branches of trees clogged underside of the Wakwella bridge in Galle.

The Metrological Department has predicted that the intermittent rains prevailing in these days will be increasing.

Since the Wakwella bridge over Gin Ganga had been blocked by debris of bamboo bushes and logs from underside making a risk of flood, a Naval relief team consist of Naval divers and 4RU team attached to Southern Naval Command was deployed to clean the underside of the bridge, yesterday (07).

Further, in circumstances where naval personnel is mostly required for security duties, prior preparatory programs are conducted in various areas in the island to avert possible contingencies at the risk of floods, as an idea mooted by Commander of the Navy Vice Admiral Piyal De Silva.