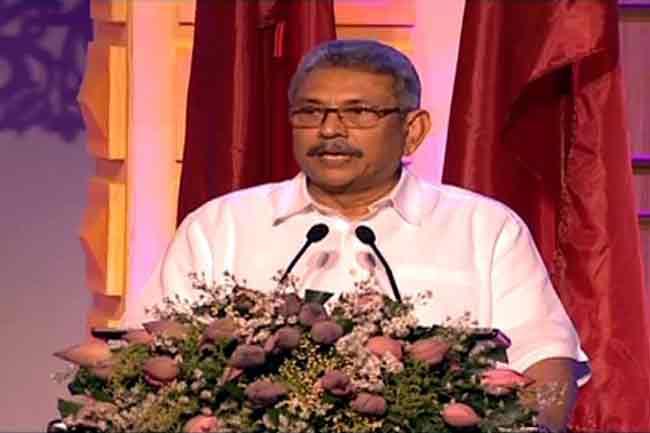 Sri Lanka Podujana Peramuna (SLPP) Presidential Candidate Gotabaya Rajapaksa states that he would not allow anyone to interfere with Sri Lanka’s sovereignty.

He mentioned this at the first-ever SLPP National Convention held at the Sugathadasa Indoor Stadium which commenced at 3 pm this afternoon (11).

At the convention, former Defense Secretary Gotabaya was named as the SLPP Candidate for the upcoming Presidential Election.

He stated that he is ready to provide leadership to overcome the challenges faced by the people in the country.

He said, “I will not let anyone lay a hand on the sovereignty of my country in the future”.

The first task of their government would be to ensure the complete security of the country, stated Rajapaksa.

“I will accept responsibility for your safety, and the safety of your children and your loved ones,” Gotabaya said.

Gotabya vowed that, if elected, he would prioritize the national security and the revival of the Sri Lankan economy, which has been hit by a lull in tourism after the attacks.

“I pledge to create a safe and secure environment in which all Sri Lankans, irrespective of their race or religion, will be able to live in peace,”

He also said that he will build a country where women can travel anywhere without fear.

Addressing the gathering, Gotabaya Rajapaksa said that the entire election campaign should be carried out with the utmost discipline and that priority should be given to the environment.