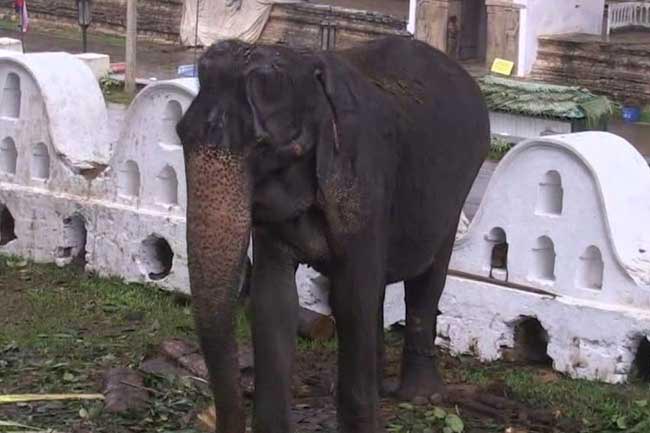 Why 70-year old elephant Tikiri was used in Perahera

Photos of an emaciated 70-year old elephant that is being paraded at the Esala Perahera were recently shared widely on social media.

Ada Derana decided to inquire into why this elephant was walked in the Esala Perahera despite being sick and old.

The female elephant, named ‘Tikiri’, had been participating in the Esala Randoli Perahera representing the Vishnu Devalaya since she was 5 years.

However, she had been walked at this year’s Randoli Perahera, covered in decorative garments and jewelry, regardless of her emaciated state.

This had received major backlash from animal rights organizations around the world.

Save Elephant Foundation (sic), set up by Thailand’s “elephant whisperer” Lek Chailert, has shared the photos of ‘Tikiri’ that show every rib in her body and raw-looking skin on her trunk.

The foundation has urged people to write to Sri Lanka’s Prime Minister, Ranil Wickremesinghe, to “end this cruelty”.

However, the owner of ‘Tikiri’ stated that the elephant was walked in the parade to fulfill a promise made to God Vishnu. According to the owner, ‘Tikiri’ had been ailing from a digestive condition for over 6 months and he had prayed to the God that he would walk ‘Tikiri’ at the next Esala Perahera if she got better from the sickness.

He states that this wasn’t done with the intention of gaining money as he had already spent nearly Rs 1.2 million on the elephant’s medication.

Subsequently, it was reported that the ‘Tikiri’ was removed from participating in the remaining parades of Dalada Perahera.