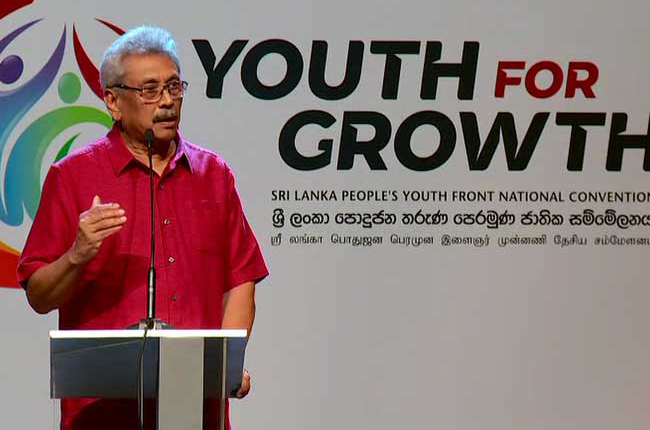 The presidential hopeful of Sri Lanka Podujana Peramuna (SLPP) Gotabaya Rajapaksa, attending the National Youth Convention of the party, addressed the solutions that would be provided to resolve the issues of the youth that concern the fields of education, employment, development, security, sport and environment.

The first phase of the SLPP National Youth Convention was held at the Nelum Pokuna Theatre yesterday (23) under the patronage of the former Defence Secretary Gotabaya Rajapaksa and National Organizer of SLPP Basil Rajapaksa.

A large number of youths representing every district had attended the convention.

The Lotus Declaration of Youth prepared with the proposals collected from youths across the country was presented to Gotabhaya Rajapaksa.

Addressing the gathering, Gotabaya Rajapaksa said that under his government more investments will be made on education.

Stating that the 21st century gives prominence to intelligence, the presidential hopeful said steps would be taken to increase the facilities at universities, upgrade them to be on par with other universities in the Asian region and expand technical education.

A long-term national policy must be made for the field of education and an education system that creates more job opportunities for local youth has to be established, he said.

The current government did not give priority to national security ever since it came to power, the former defence secretary continued.

The leaders of a country must be aware of the importance of national security and Sri Lanka will be stabilized under his government, while restoring the intelligence units, the SLPP presidential candidate said assuredly.

The current government has blemished the terms good governance and democracy, Gotabaya claimed.

The younger generation should live happily and think positively, he continued.