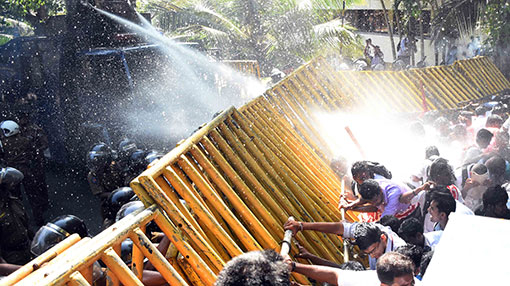 Ada Derana reporter said that the protesting students had attempted to march through the blockade put up by police at the entry to Lotus Road.

He also said that severe traffic congestion has been reported in the area and connected roads as a result of the agitation.

Lotus Road was temporarily closed due to the protest march which had arrived through Technical Junction in Maradana and was heading towards the Presidential Secretariat.

The protest was organized by the Inter University Students’ Federation (IUSF) against attempts to pass the Quality Assurance and Accreditation Council (QAAC) Act in parliament, which they claim would nullify the role of the Sri Lanka Medical Council (SLMC).