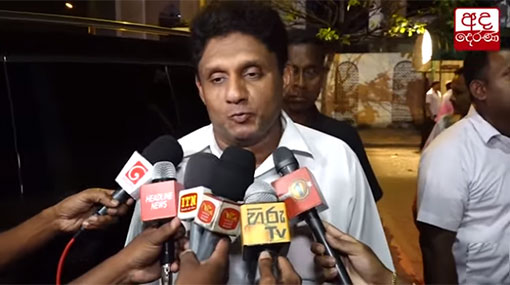 Minister Permadasa had arrived at Temple Trees at around 9.30 p.m. last night for discussions with UNP leader Ranil Wickremesinghe which lasted until 11.30 p.m.

The crucial meeting was expected to end with a final decision being reached on the presidential candidate of the party.

However, speaking to reporters after the meeting concluded Minister Sajith Premadasa said the discussion were very cordial and that he believes a good result can be expected within the next couple of days.

He said that the talks focused on the UNP, the United National Front (UNF) and the future plans of the party.

“You will be able to see the results within the next couple of days,” he reiterated when repeatedly questioned by journalists about the outcome of the meeting.

Minister of Housing, Construction and Cultural Affairs Sajith Premadasa, who is also the UNP’s deputy leader, has openly declared his intention to contest the Presidential Election.

However, the party is yet to formally announce its candidate while Prime Minister Ranil Wickremesinghe has reportedly told the senior members of the party that he intends to be the presidential candidate.

In a meeting recently held with the senior members of the UNP, it was decided that the party leader and the deputy leader must come to an agreement on who will be contesting in the upcoming presidential election.

This special meeting was scheduled to be held last Sunday (08), however, it was later postponed.