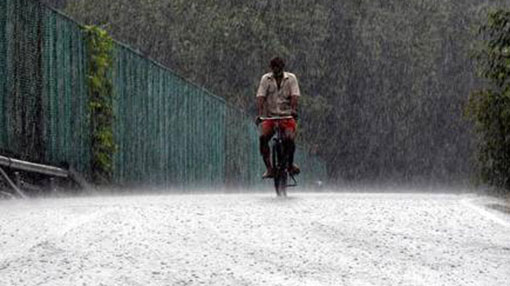 Heavy rainfall and lightning expected during next few hours

The Department of Meteorology says that showers or thundershowers with heavy rainfall about 100mm and lightning activities are likely at some places in Western, Central, Sabaragamuwa, Eastern, North-Central and Northern provinces during next few hours.

The general public is kindly requested to take adequate precautions to minimize damages caused by temporary localized strong winds and lightning, it said issuing an advisory.

Temporarily strong gusty winds up to 70-80 kmph are also possible during thundershowers, the department said.

Meanwhile it also said that there is a high possibility for afternoon thundershowers particularly in Eastern, Uva, Central and North-central provinces and in Vavuniya and Mullaitivu districts during next few days.

Showers or thundershowers will occur at Western, Sabaragamuwa and North-western provinces and Galle and Matara districts and fairly heavy rainfall about 100mm is likely at some places in these areas.

Showers or thundershowers will occur at several places elsewhere after 2.00 pm.