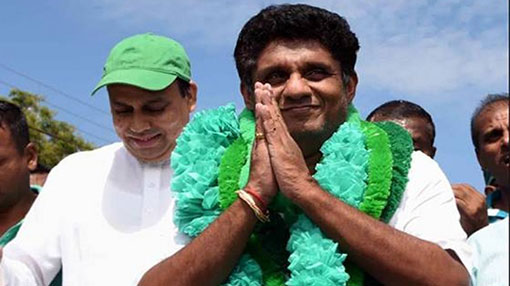 The Working Committee of the United National Party (UNP) has unanimously decided to name Deputy Leader Sajith Premadasa as the UNF’s candidate for the upcoming President Election.

The UNP Working Committee convened a meeting at 3.00 p.m. today at the party headquarters – Sirikotha, to finalize the presidential candidate of the United National Front (UNF).

Accordingly, during the meeting UNP leader Prime Minister Ranil Wickremesinghe had reportedly proposed the name of Minister Sajith Premadasa for candidacy and the Working Committee had unanimously approved it, a source said.

He had stated that the opinion of many was to take a decision without causing a division in the party and that they will be moving forward according to the policies.

Therefore the preference of the majority is Sajith Premadasa, he said. Wickremesinghe then declared that the party will now have to join together with the other political parties in the alliance and discuss on how to win the election.

A large number of party supporters have currently gathered outside the UNP headquarters and have reportedly already started celebrating the decision with fireworks and loud cheers.

The UNP supporters outside Sirikotha are awaiting the arrival of Sajith Premadasa after concluding the meeting and other formalities.