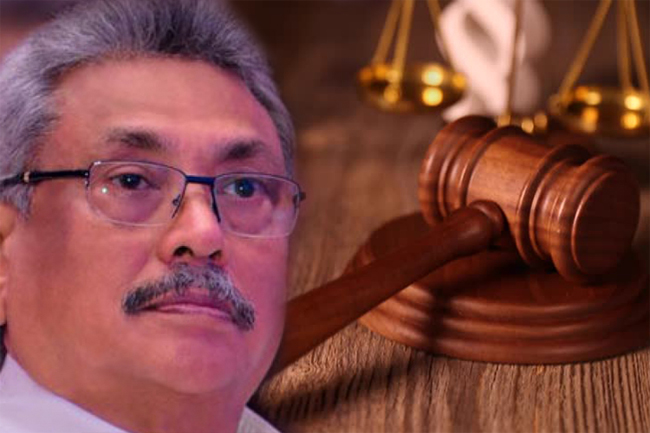 A three-judge bench of the Court of Appeal has commenced considering the petition filed against recognizing former Defence Secretary Gotabaya Rajapaksa as a Sri Lankan citizen, says Ada Derana reporter.

Attorney-at-Law Suren Fernando is currently presenting submissions on behalf of the petitioners.

It is reported that parliamentarians and lawyers are among the large number of gathering at the courtroom.

The Appeals Court President, Justice Yasantha Kodagoda had requested the attendees to behave accordingly as the procedures of the lawsuit are strictly between the judge bench and the attorneys representing the petitioners and the respondents.

The petition was filed by two social activists Gamini Viyangoda and Prof. Chandraguptha Thenuwara on Monday (30).

The Controller General of the Department of Immigration and Emigration, the Commissioner General of the Department of Registration of Persons, Minister Vajira Abeywardena, Secretary to the Ministry of Internal & Home Affairs and Provincial Councils & Local Government, Opposition Leader Mahinda Rajapaksa, former Defence Secretary Gotabaya Rajapaksa, Acting Inspector General of Police (IGP), Director of the Criminal Investigation Department (CID), Senior Deputy IGP of CID and Officer in Charge of CID’s Special Branch have been cited as the respondents of the petition.

The petitioners allege that Gotabaya Rajapaksa has obtained a passport and a National Identity Card (NIC) claiming that he revoked his US citizenship.

The petitioners further stated that they have the necessary information to prove the former Defence Secretary did not submit proper documentation to verify revocation of his US citizenship when obtaining a Sri Lankan passport and a NIC.

Hence, the petitioners request the Appeals Court to deliver an order suspending the issuance of a passport and a NIC to Gotabaya Rajapaksa. They have also sought an interim order preventing the functioning of said passport and NIC until the court delivers the petition’s verdict.