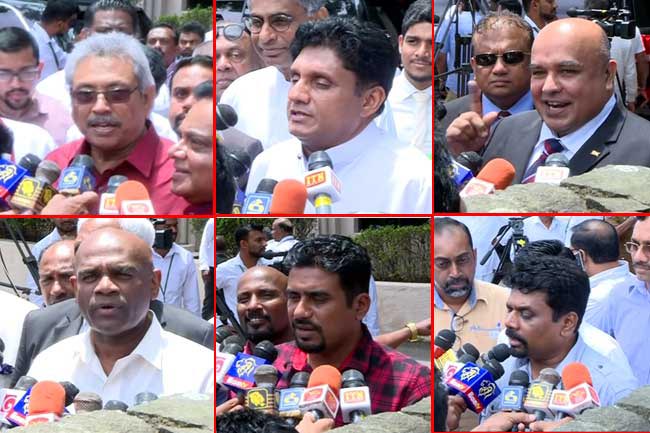 Thirty-five candidates submitted their nominations to contest at the Presidential Election 2019, today (07).

Following the submission of the nominations, several candidates expressed their views to the media.

Sri Lanka Podujana Peramuna (SLPP) candidate Gotabaya Rajapaksa said he believes that a great victory can be achieved with the cooperation of all communities.

“We will hold our first rally in Anuradhapura and start our campaign from there”, he said.

Minister Sajith Premadasa, entering the presidential race under the New Democratic Front (NDF), said they will be committed to giving the people of this country the opportunity of development, the right to life and to create an era in which humanity will reign by launching the greatest possible development revolution in the country.

Former Commander of the Sri Lanka Army General Mahesh Senanayake, submitting nominations for the election under the National People’s Party, stated that the people in this country who had suffered for 71 years have now received a presidential candidate who is impartial.

He said,” I call upon everyone who loves the country, loves the environment, loves the people, wants to develop the country to make this an opportunity.

This is the last chance. Otherwise, I would not have come forward. We will win this.”

Janatha Vimukthi Peramuna (JVP) Leader and National People’s Power presidential candidate Anura Kumara Dissanayake all regimes elected by the people in the past 71 years have failed to fulfill the people’s expectations.

Therefore, the people should learn lessons from the history and join with the National People’s Power on November 16, he said.

“Compass is the symbol. We are set to contest under a good sign that will guide the people and lead this country towards the future”, said Dissanayake.

The presidential candidate of the Frontline Socialist Party, Duminda Nagamuwa, said that their aim is to build a socialist force within the country.

“No matter who submitted nominations, I will win the election. This is a secret. If you want to know why I would win the Presidential Election, come to Sugathadasa Indoor Stadium at 3 pm on October 11.”