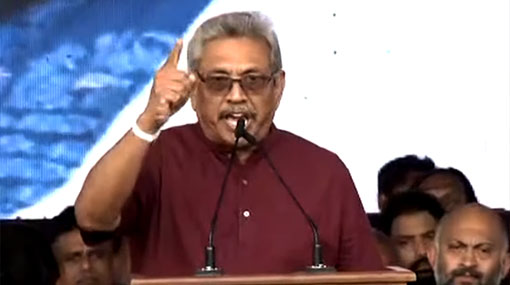 SLPP Presidential Candidate Gotabaya Rajapaksa says his duty is to make Sri Lanka a safe country once again and also promised to release all war heroes who have been imprisoned over ‘false’ charges.

He made these comments while addressing the maiden election rally of the Sri Lanka Podujana Peramuna (SLPP) in Anuradhapura today (9).

He expressed his immense gratitude to all members of the Sri Lanka Freedom Party (SLFP) for the “historic decision” taken by the party to support him at the election.

The former Defence Secretary charged that within 5 years of coming to power, the incumbent government has taken away the people’s freedom to visit a church without being afraid of a bomb attack.

“For you all to fulfill your duty on November 16th, my duty is to make this country a safe country once again,” he pledged.

He also vowed that once their government comes to power farmers will be given their fertilizer subsidy free of charge and also that all micro finance debt and the debt of the farmers will be waived-off.

He promised that all imprisoned war heroes will be released by the morning of the day after the presidential poll.

“A large number of war heroes are languishing in prisons over false charges and cases. I would like to declare at this moment that they will all be released by November 17th morning,” Rajapaksa said.

He also promised that all personnel in the civil security service who have completed 22 years of service will get a pension under their government.