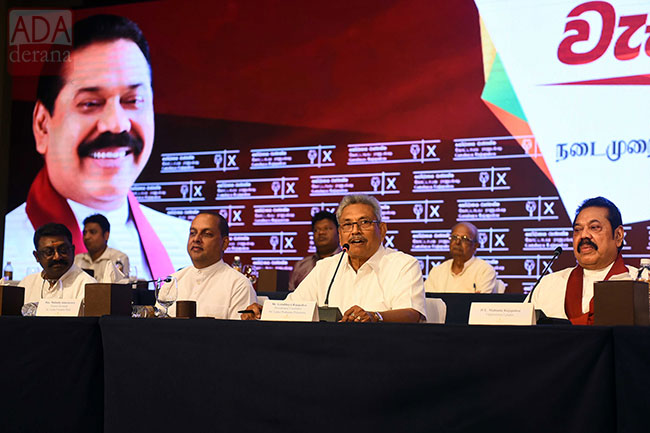 We have to move forward and forget old allegations - Gotabaya

SLPP Presidential Candidate and former Defence Secretary Gotabaya Rajapaksa says that the UNHRC resolution co-sponsored by Sri Lanka is not a “legal document” and that while they will continue to work with the United Nations, he cannot recognize any agreement they have signed with the incumbent government.

He made these comments while responding to questions during a special press conference held today (15) in Colombo.

Rajapaksa was asked regarding his stand on Sri Lanka’s commitments to the UN Human Rights Council in 2015 and whether he will proceed with that commitment.

“We will always work with the United Nations. But I can’t recognize what they have signed with a different government. It’s not with my government,” he said.

“In my personal view that is not a legal document. But always we will work with the United Nations and human rights organization as well to solve any issues they have,” the SLPP candidate added.

Asked whether he will recognize that as an agreement made by Sri Lanka as a state, Rajapaksa said he will not and that they have already rejected it.

Gotabaya Rajapaksa was also asked to explain his recent statement about acquitting soldiers who are incarcerated the following morning after he is elected.

“You already know how these soldiers were punished. Not only the soldiers, even the others. They were politically victimized,” he charged.

Rajapaksa added: You know the procedure. Two very senior officials from the Attorney General’s Department had confirmed that the procedure that they have adopted and that procedure was never adopted in Sri Lanka where in a political party headquarters or it was mentioned with the political party leaders. The decisions were made at Temple Trees.”

He alleged that it cannot be a procedure which has been adopted justifiably and therefore is not correct, it is politically motivated. “Therefore we will release them from the remand.”

“I think 100% of these soldiers were not convicted in a court of law. These are remanded by producing ‘B reports’ and especially a majority of them are now under investigation from various institutions,” he said.

The former Defence Secretary was also asked how he will proceed on the issue of accountability for allegations of war crimes. He said: “We have already done even during our government we had proposed a system and we have continued on that process and when this government came into power they completely neglected that process and went to a new process.”

Rajapaksa also stated that the former government found out the number of people missing during the war and that they found the “correct numbers”, which were produced in a document.

“Unfortunately the people who were responsible for investigating, and the foreign investigators without even coming without even listening to us they produced their own reports, their own numbers,” he said.

“There are a lot of ambiguous documents in these things that we will follow because we are an independent country and we have our institutions where we can follow without foreign appointed people….”

He further added that the people of the Northern and Eastern provinces have more important issues than these things and that they need employment, development and education.

“These are the important things. We can’t hang on on all those old things and carry on. We have to move forward. We have to forget about these hanging on to old allegations and all that.”

He stated that there are a lot of things that they can do for the betterment of the people of that area.