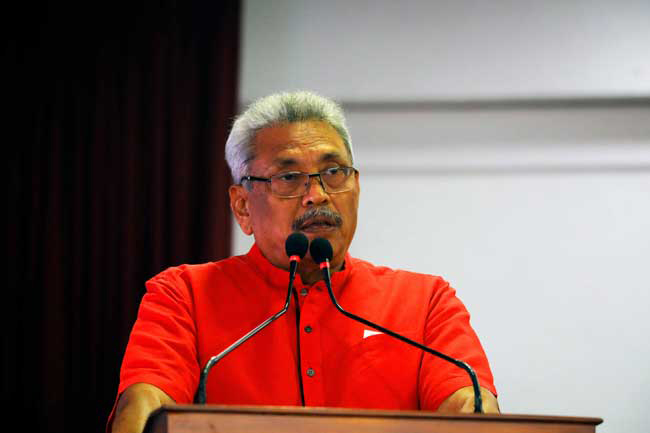 State resources sold by govt. must be reclaimed - Gotabaya

The manifesto of Sri Lanka Podujana Peramuna’s presidential candidate Gotabaya Rajapaksa is scheduled to be launched on the 25th of October.

Parliamentarian Udaya Gammanpila stated that this decision was taken during a discussion held at the official residence of Opposition Leader Mahinda Rajapaksa last night (15).

Meanwhile, Gotabaya Rajapaksa has pointed out that Sri Lanka’s sovereignty is currently under threat.

He stated this addressing a convention held at the Sri Lanka Foundation Institute yesterday. The event was held under the auspices of SLPP presidential candidate Gotabaya Rajapaksa and Opposition Leader Mahinda Rajapaksa.

He also commented that the State resources the incumbent government sold to foreign countries must be reclaimed. “We have a policy that ensures our country moves forward, putting the nation’s sovereignty at the forefront,” Gotabaya Rajapaksa added.

Speaking of the UNHRC resolution co-sponsored by Sri Lanka during the special press conference held in Colombo yesterday, Rajapaksa said “We will always work with the United Nations. But I can’t recognize what they have signed with a different government. It’s not with my government.”