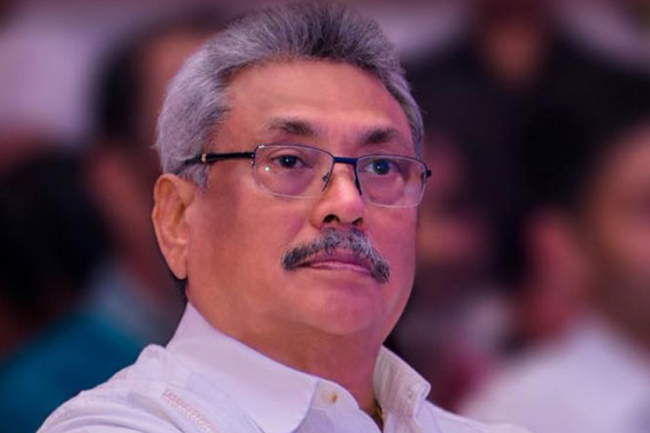 The United States District Court for the Central District of California has dismissed and denied the claims raised by Ahimsa Wickrematunge against Gotabaya Rajapaksa.

On the 15th of July 2019, Ahimsa Wickrematunge had lodged the case against presidential hopeful, former Defence Secretary Gotabaya Rajapaksa, alleging him for extra judicial killing, crimes against humanity and torture.

The case was filed by the International Organization of Truth and Justice Project on behalf of the daughter of late journalist Lasantha Wickrematunge, Ahimsa Wickrematunge.

Gotabaya Rajapaksa has maintained that the First Amended Complaint (FAC) against him should be dismissed as he is immune from suit under the doctrine of common law foreign official immunity, the US District Court said, adding that it lacks the subject matter jurisdiction over this action.

According to the Court’s report, it had followed a two-step procedure developed for resolving a foreign state’s or official’s claim of sovereign immunity. Accordingly, if the US State Department issues a ‘suggestion of immunity’ (SOI) upon the request of a foreign state, the case can be dismissed. If an SOI was not issued, the Court should determine whether the ground of immunity is one which it is the established policy of the State Department to recognize.

The Stated Department had not issued an SOI in this case. Hence, the Court had utilized the second step to determine if Rajapaksa is entitled to foreign official immunity.

Rajapaksa has maintained that he is entitled to foreign official immunity as the FAC plainly accuses him of acts performed in his official capacity as the Secretary of Defense.

The Court stated that Ahimsa Wickrematunge has not argued that Rajapaksa acted in his official capacity on behalf of the Sri Lankan government. As the plaintiff has not alleged that Rajapaksa took any direct action against Lasantha Wickrematunge, her allegations of the defendant’s involvement are reliant upon Rajapaksa’s role as the Defence Secretary, the Court said further.

“Although, Defendant was a US citizen and the current status of his citizenship is disputed, Plaintiff has cited to no authority suggesting that Defendant’s citizenship alone should override the fact that all of the allegations against him concern actions taken in an official capacity as the Sri Lankan Secretary of Defense,” the US District Court stated.

The Court, stating that Rajapaksa is entitled to common law foreign official immunity, mentioned that it lacks the subject matter jurisdiction on that basis and decided to dismiss Ahimsa Wickrematunge’s claims against him. 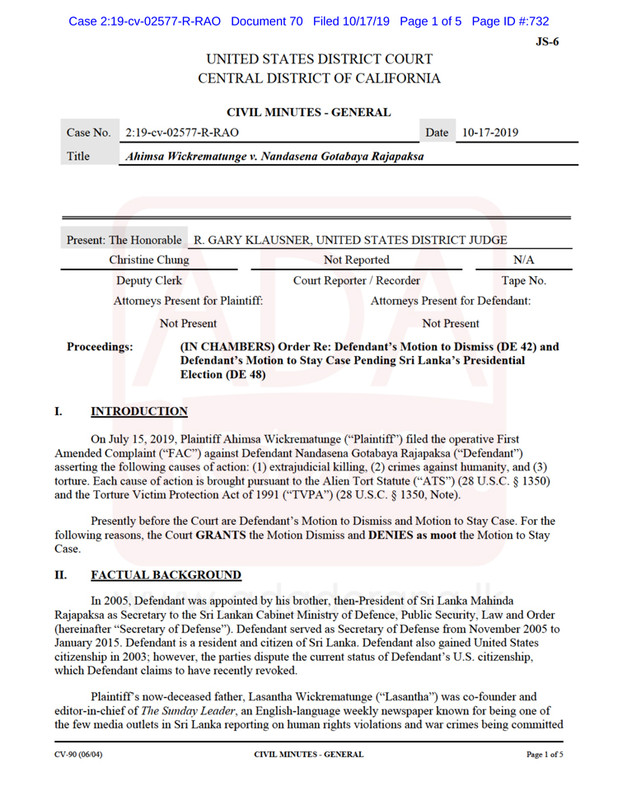 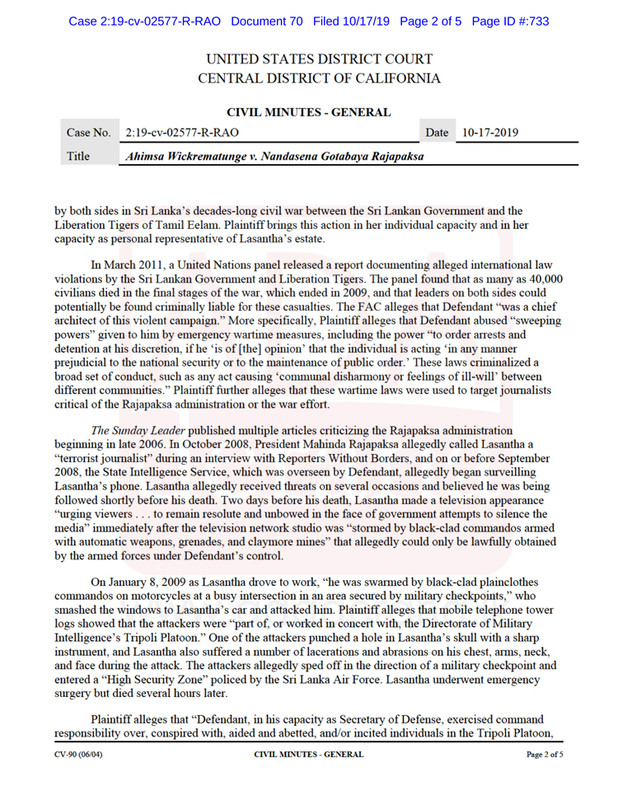 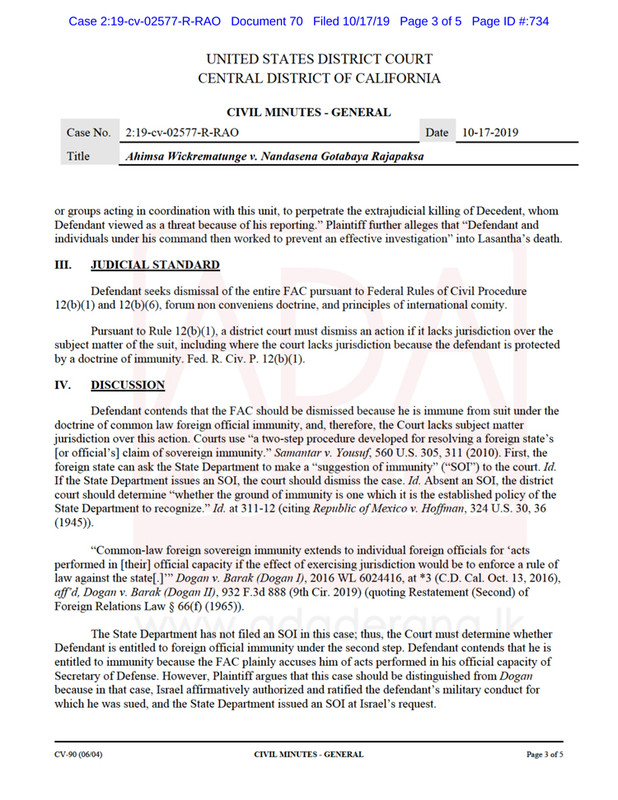 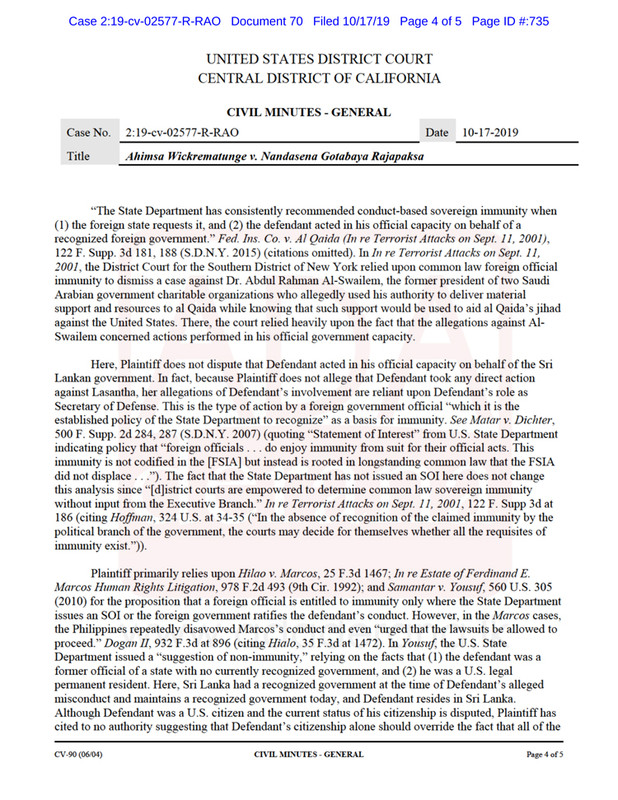 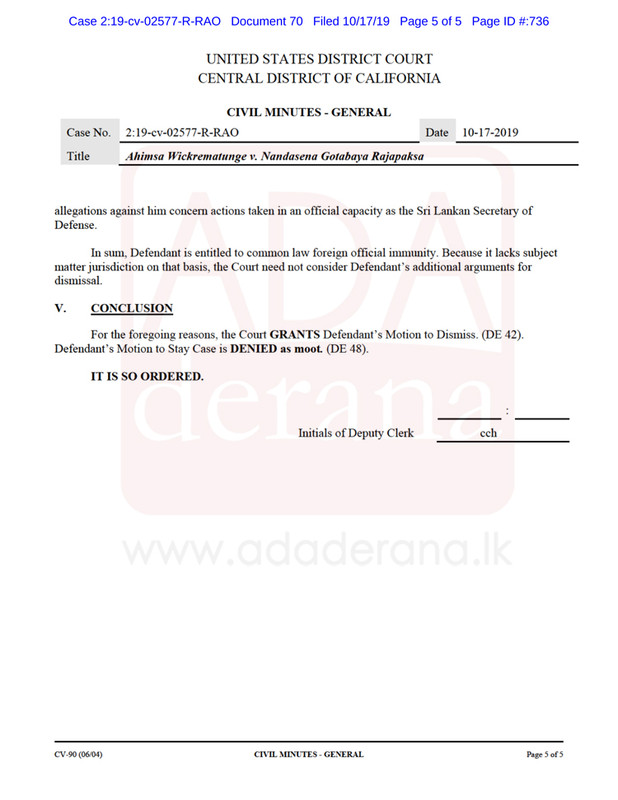