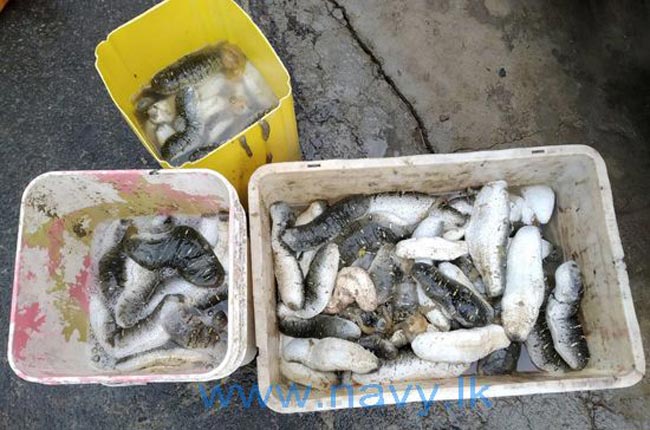 Eleven persons who engaged in illegal catching and transporting of sea cucumber were apprehended by Navy during raids carried out in Trincomalee and at the Vankalai area.

Ten persons who engaged in illegal fishing without valid fishing licenses were apprehended by Eastern Naval Command, during a raid conducted at the Nallur beach area in Trincomalee.

The suspects are residents of Nilaweli area in the ages between 23 and 41, stated the Sri Lanka Navy.

Apprehended persons along with the dinghies, OBMs, stock of sea cucumber, lobsters and fish were handed over to the Assistant Director of Fisheries-Trincomalee for further investigation.

Further, a suspicious three wheeler was observed at the roadblock deployed by the North Central Naval Command near the Catholic church, Vankalai.

Upon investigation, 40kg of sea cucumber was found in the three-wheeler and a suspect was arrested for lack of license to transport sea cucumber.

Reportedly, the suspect is a resident of Nannttan area in Mannar. He, along with the three-wheeler and sea cucumber, was handed over to Assistant Director of Fisheries-Mannar for legal action.