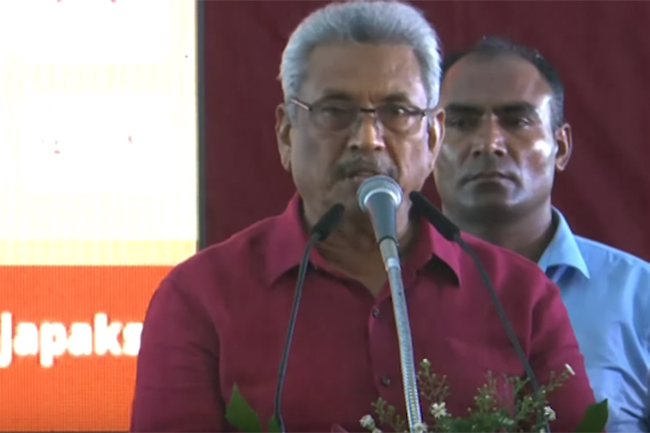 Only we can guarantee countrys security Gotabaya

The presidential front-runner of Sri Lanka Podujana Peramuna, former Defence Secretary Gotabaya Rajapaksa says it is only his government that is capable of guaranteeing the security of the country.

Addressing a campaign rally held at Nittambuwa last evening (02), Rajapaksa insisted a cabinet that it is rife with foreign infringements, signed conventions to send the war heroes to foreign courts and imprisoned members of the intelligence service cannot guarantee the security of the country.

“We guarantee that there won’t be room for extremist terrorism in this country again, just as we ended the terrorism before,” Rajapaksa said adding that it is only them who can ensure the country’s security.

At a campaign rally in Alawwa, Rajapaksa promised said “the Police provide a great service to the country. It was I who expanded the Police Department and resolved their issues. However, there still remains unresolved salary anomalies.”

Speaking further he pointed out that a Constable with qualifications should have the opportunity to be promoted all the way to the post of DIG.

“Just as we established the Kotalawala University for the Army, a similar institution must be established for the Police Department, for its advancement,” Rajapaksa said further.

Police officers serve beyond 8-hour shifts each day, and the service must be reformed to limit their duty time to 8 hours so that they can work efficiently Rajapaksa commented.

“Just as we built a hospital for the Army, we will build one for the Police as well,” SLPP’s presidential candidate promised.