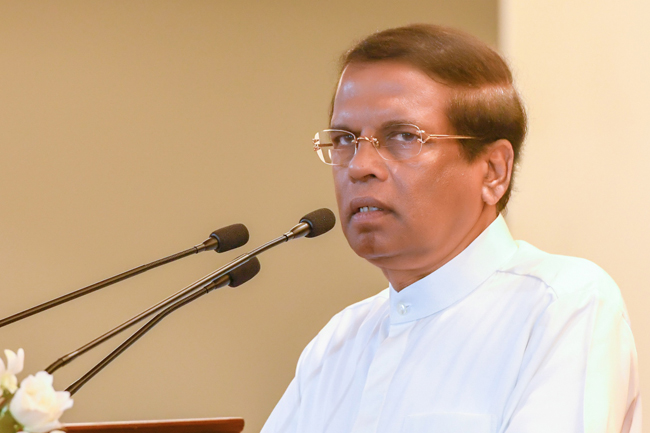 President Maithripala Sirisena has expressed high appreciation to the armed forces, the police and the intelligence services for their absolute commitment to national security and regional security.

The President made this statement participating at the ceremony to declare open the new Army Headquarters at Akuregoda, Pelawatta this morning (08).

The President was welcomed by the Commander of the Army Lieutenant General Shavendra Silva at the new Army Headquarters premises.

A gun salute and a military parade were held to welcome of the President, following which the President unveiled the plaque and opened the new military headquarters.

The foundation stone for this construction was laid on March 11th, 2011 for the Ministry of Defense and the Army Headquarters on a 77 acre land in Akuregoda, Pelawatta. The estimated cost for this project is Rs. 53.3 billion, making it the largest construction project in Sri Lanka.

With the guidance of President Sirisena, construction work was expedited. The President declared open the Army Headquarters and Office Complex with modern technology, which was completed under the first stage of the Defense Ministry and the Defense Forces Headquarters complex.

Accordingly, the head office of the Sri Lanka Army, which is presently located in various parts of the country, has been established in this main complex. The cost of renting buildings for the establishment of various sections of the Army in Colombo and its suburbs had cost nearly Rs. 50 million per month and now that money would be saved as all these units have moved to the new headquarters.

Addressing the gathering, President Sirisena recalled the role played in safeguarding national security by the Armed Forces. He also mentioned the army services in the welfare of the country.

The President also handed over service ‘Sewabhimani’ medals to the service personnel and civilian officials.

A special souvenir was subsequently presented to the President to mark the unveiling.