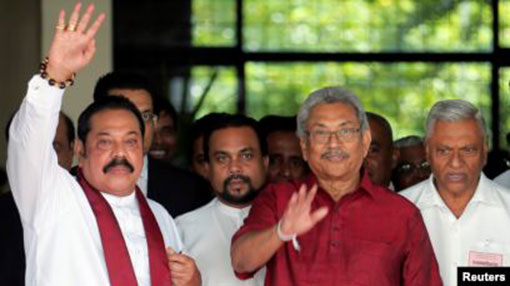 Leaders of the Sri Lanka Podujana Peramuna (SLPP) Mahinda Rajapaksa requested all party activists and supporters to celebrate the election victory peacefully and without causing inconvenience to anyone.

He said the people have voted decisively in their favour at this election because of disaffection with the conduct of the government over the past five years.

“Therefore it is our duty by the people of this country, to conduct ourselves in a manner that will not inconvenience anyone,” he said, issuing a statement after his brother Gotabaya Rajapaksa was declared the winner of the Presidential Election.

He said they will be initiating a programme of action to deliver justice to all those who have been subject to “persecution and harassment” by this government over the past five years.

“I salute the people of Sri Lanka for decisively defeating the 2015 style attempt made to once again purloin the mandate of the people through backroom deals with various chauvinistic ethnic and religious groupings organized around narrow political agendas.”

The time has now come to put an end to this dangerous game of promoting “religious and ethnic chauvinism” for political purposes, he said.

The statement further read: “This presidential election differs from all previous presidential elections, because of the complications in the system of governance brought about by the 19th Amendment. After the new President takes oaths, we will be studying the provisions of the 19th Amendment to the Constitution and planning our immediate programme of action accordingly.”

“We now have an opportunity to give a sense of direction to this country which has been drifting rudderless for five years. As stated in our candidate’s election manifesto, it will be necessary to rebuild the economy from the bottom upwards and to introduce constitutional and legal reforms to achieve this objective.”

“We will keep the people informed about further developments in this regard in the coming days. In the face of the unequivocal people’s mandate delivered at this election, we believe the government will abide by parliamentary traditions as appropriate in such circumstances.”