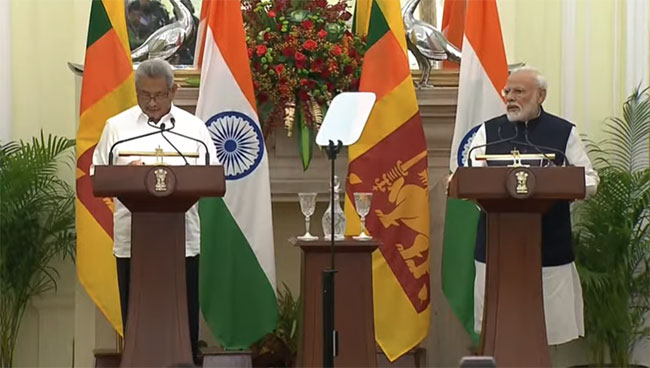 President Gotabaya Rajapaksa has extended an invitation to Indian Prime Minister Narendra Modi to visit Sri Lanka as the first head of State to arrive in the island nation during his tenure.

The two leaders delivered a joint statement at Hyderabad House in New Delhi this afternoon (29).

After meeting with Modi for bilateral talks, Rajapaksa also announced the release of all Indian fishermen boats currently in Sri Lankan custody and vice versa.

Meanwhile the Indian Prime Minister stated that $400 million line of credit is to be extended to Sri Lanka to strengthen its economy and another $50 million to fight terrorism.

Under Indian housing project, 46,000 houses have already been made in Sri Lanka while another 14,000 houses are further being made for Tamil origin people. $100 million credit line was given for solar projects in Sri Lanka.

Modi said they also had a good discussion on 20 community development projects and other people-centric projects in sync with the educational exchanges.

He said that India has always, in all measures, challenged terrorism and that it has always invited global investigation on cross-border terrorism.

Modi stated that the mandate given to Sri Lankan President Gotabaya Rajapaksa is the expression of the ambitions of the people of Sri Lanka for a strong country.

A strong Sri Lanka is not only in the interest of India but that of the entire Indian Ocean region, he said.

The Indian Prime Minister announced a financial assistance of $50 million to Sri Lanka to deal with the challenge of terrorism after holding “fruitful” talks with Gotabaya Rajapaksa.

The Prime Minister also said he was confident that the new government in Sri Lanka will fulfill aspirations of the Tamil community in the island nation.

Modi said that the Sri Lanka government will take forward the reconciliation process to meet the aspirations of Tamil community in Sri Lanka which also includes the implementation of 13th Amendment.

“President Rajapaksa told me of his inclusive political point of view on ethnic harmony. I am confident that the Sri Lankan Government will pursue the process of reconciliation to meet the aspirations of equality, justice, peace and respect of Tamils,” said Prime Minister Modi while sharing the stage with Rajapaksa.

“Sri Lanka and India share a strong bond. We give priority to our relations with Sri Lanka under our ‘Neighbourhood First’ policy,” he added.

Modi said he and President Rajapaksa held a discussion on a wide range of issues including mutual security and against terrorism. They also discussed the issue of fishermen.

“I have discussed in detail with President Rajapaksa on strengthening bilateral cooperation for mutual security and countering terrorism. Sri Lankan police officers in major Indian institutions are receiving counter-terrorist training,” he said.

“We also discussed issues affecting the livelihood of fishermen. We agree that we will continue to have a constructive and humanitarian approach in this matter,” PM Modi added.

“I want to extend my hearty congratulation to President Gotayaba for his election victory. I want to congratulate the people of Sri Lanka for successfully concluding the election process,” PM Modi said.

“It is a matter of honour for us that President Rajapaksa chose India for his first foreign trip and gave us the opportunity to honour him in India within two weeks of taking office,” he added. -Agencies

I am pleased to welcome President Gotabaya Rajapaksa and his delegation to India. I heartily congratulate the President for his decisive victory in the election. I congratulate the people of Sri Lanka for the smooth election process. The strength and maturity of democracy in Sri Lanka is a matter of great pride and joy. It is an honor for us that President Rajapaksa chose India for his first foreign visit and gave us a chance to welcome him in India within two weeks of assuming office. It symbolizes the strength and dynamism of friendly relations between India and Sri Lanka. It is also a sign of how much importance both countries attach to these relations. We look forward to working closely with President Rajapaksa for the progress of both countries and peace, prosperity and security in our entire common region.

India is Sri Lanka’s closest maritime neighbor and a trusted friend. Our historical, ethnic, linguistic, cultural and civilizational contacts are a strong foundation of close relations between the two countries.

In line with my Government’s “Neighborhood First” policy and SAGAR doctrine, we prioritize our relations with Sri Lanka. The security and development of our two countries are inseparable. Therefore, it is natural that we should be aware of each other’s safety and sensibilities.

Today the President and myself had a very good and fruitful discussion on bilateral relations and international affairs of mutual interest. We have decided that together we will strengthen the multi-faceted partnership and cooperation between the two countries. I have assured the President of India’s commitment to a development partnership with Sri Lanka. As always, this cooperation will be in accordance with the priorities of the people of Sri Lanka. A new $ 400 million line of credit will give a boost to infrastructure and development in Sri Lanka. I am confident that the Sri Lankan economy will benefit as well as this Line of Credit will also accelerate the Project Cooperation of mutual benefit between the two countries. We are delighted that under the Indian Housing Project, 46,000 houses have been constructed for the internally displaced in the Northern and Eastern Provinces of Sri Lanka. There is good progress in the construction of 14,000 houses for Tamils of Indian origin in the Up-Country region. I am also pleased that we have agreed to use the previously announced $ 100 million credit line for solar projects in Sri Lanka early. There was a good discussion between President and me on 20 community development projects and other people-centric projects issued by India in Sri Lanka on the basis of grants in education and infrastructure.

India has always opposed terrorism in all its forms and also expected action from the international community against other forms of terrorism, including cross-border terrorism. On the occasion of Easter this year, terrorists in Sri Lanka launched brutal attacks on the diversity of mankind and the valuable heritage of symbiosis. I went to Sri Lanka immediately after the elections in India to express India’s unwavering support in the Sri Lankan fight against terrorist and extremist forces. I have discussed in detail with the President Rajapaksa for mutual security and to further strengthen mutual cooperation against terrorism. Sri Lankan police officers in major Indian institutions are already receiving the benefit of counter terrorist training. I am happy to announce a special Line of Credit of 50 million dollars to Sri Lanka to combat terrorism.

Issues affecting the livelihood of fishermen were also discussed. We agreed that we will continue with a constructive and humane approach in this matter.

We also openly exchanged views on reconciliation in Sri Lanka. President Rajapaksa told me about his inclusive political outlook on ethnic harmony. I am confident that the Government of Sri Lanka will carry forward the process of reconciliation, to fulfill the aspirations of the Tamils for equality, justice, peace and respect. It also includes the implementation of the 13th amendment. India will become a trusted partner for development throughout Sri Lanka including North and East.

I once again welcome President Rajapaksa to India. His visit will strengthen our mutual relations. And our cooperation will promote development in both countries and prosperity, peace and stability in the region.

Disclaimer: PM’s speech was delivered in Hindi. This is an approximate translation of the speech.