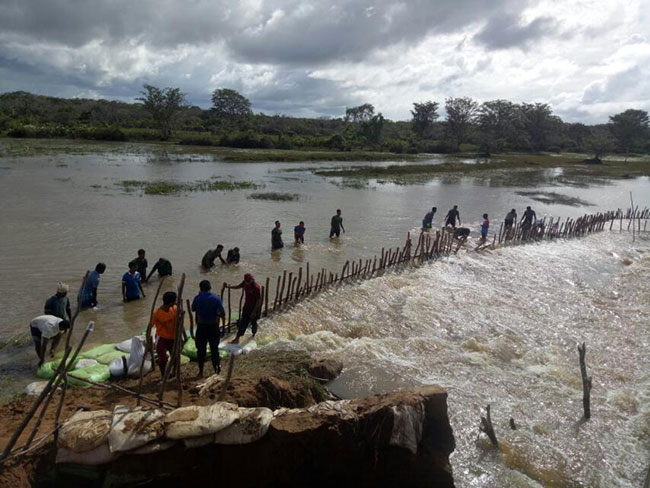 Over 5,400 affected due to adverse weather

The Disaster Management Center (DMC) says that 5,415 persons belonging to 1,480 families have been affected by the adverse weather conditions in parts of the country.

The Department of Meteorology says that the prevailing showery condition is expected to continue over the island in the next few days as the Northeast Monsoon continues to be in active phase.

Showers or thundershowers are expected to occur in Northern, North-central, Eastern and Uva provinces and elsewhere.

Fairly heavy showers about 75-100 mm are likely at some places in Central, Uva, Sabaragamuwa, Western, Southern provinces and in Mullaitivu, Trincomalee and Batticaloa districts.

A landslide triggered by torrential rains on Saturday (30) claimed three lives including a woman and a child in Malapattawa area, Walapane - Nuwara Eliya.

Troops recovered three dead bodies and handed over them to the Police for onward arrangements while another search was launched this morning for the 15-year-old teenager still reported missing.

Meanwhile three houses were damaged due to a landslide at the Urumeetenna Kanda in Bibila while it had also destroyed the crops in the area.

Around 54 persons belonging to 20 families, from Senapathiya and Merdapitiya villages which are at the foot of the mountain, have been relocated to safer locations owing to the landslide.

Meanwhile two of the six emergency sluice gates of the Nachchaduwa Tank have been opened as the water level of the tank is nearing spill level.

Inginimitiya Reservoir in Puttalam has also reached spill level for the first time in three years. All six sluice gates of the reservoir have presently been opened while the people living near the valley downstream have been cautioned due to this.