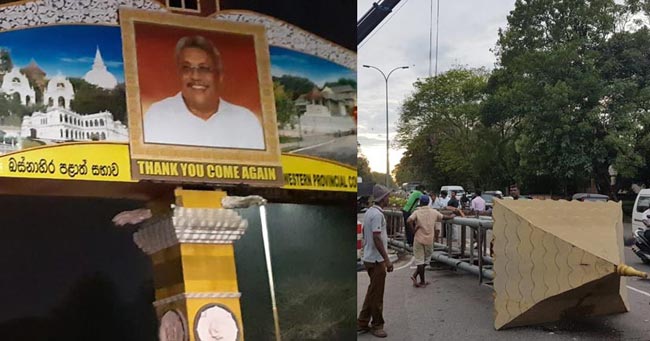 President removes pandal with his portrait in Katunayake

A pandal, with a portrait of President Rajapaksa, had been erected at the entry road to the Bandaranaike International Airport (BIA), in Katunayake.

However, upon his return from the India tour, the President had ordered for the immediate removal of the said pandal.

Accordingly, the pandal was removed this afternoon and it was overseen by the Governor of the Western Province.

Previously, the pandal erected to welcome the public entering the BIA entry road had carried the image of former President Maithripala Sirisena.

According to Ada Derana reporter, the pandal had been set up in 2008 and had discolored since.

Throughout his presidential election campaign, President Gotabaya Rajapaksa maintained a policy of not putting up portraits and images of him in public, and, even following his victory, he requested his supporters not to use his image or portraits as signs of celebrations.

Keeping true to his statements, President Rajapaksa ordered state institutions to replace the traditional President’s portrait with the national emblem.