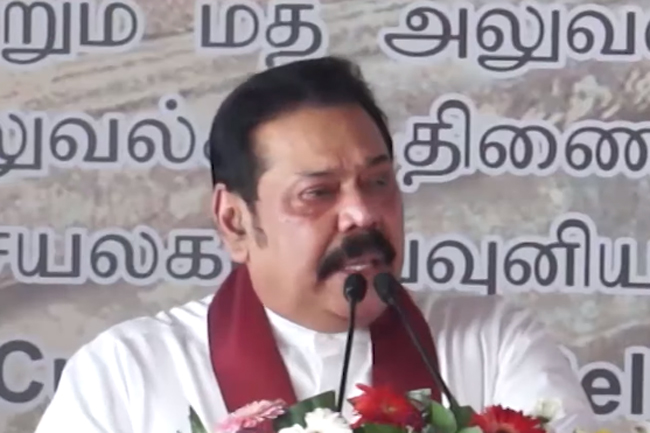 Non-Governmental Organizations (NGOs) have influenced the local education system in subtle ways and it is high time that Sri Lankans stay vigilant of what is being put into the minds of children, says Prime Minister Mahinda Rajapaksa.

He expressed these views addressing the National Dhamma School Convention and Awards Ceremony held at Irattaperiyakulam in Vavuniya yesterday (27).

Speaking further, PM Rajapaksa said: “We should realize that there is a concerted and ongoing attempt to divide the country, to destroy the Sinhala Buddhists, to disrupt the family as an institution among the Sinhala, Tamil, Christian and Hindu sections of the population and to create divisions between children and their parents, between students and their teachers, between children and religions. Programmes aimed at achieving these objectives begin at the level of primary schools. After a few years, the way of thinking of the Sinhala population would have changed without anyone even realizing it.”

He noted that an expeditious investigation will be carried out into the ideas being put into the minds of school children through school text books.

He added: “We will put in place a programme to attract more children and youth to Dhamma Schools under the guidance of the Maha Sangha. What should happen is that children and youth should be motivated to go in search of the temple and our national heritage. I believe that in order to achieve that objective, our approach also has to change with the times. A programme should be put in place to show appreciation for the voluntary work done by Dhamma school teachers. The Dhamma schools depend on their dedication. A special programme will have to be put in place to maintain the Dhamma Schools located in remote areas.”