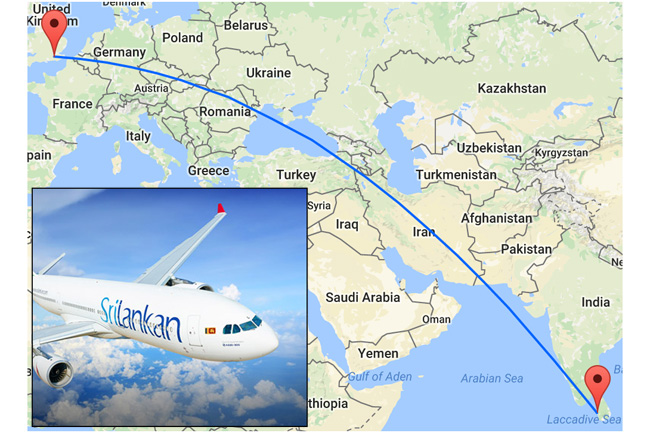 SriLankan Airlines has altered the route of its Colombo-London-Colombo flights to avoid the airspace of Iran and Iraq with immediate effect.

This measure was implemented as a precautionary measure, due to the prevailing unsettled situation in the Persian Gulf region, Sri Lanka’s national carrier said issuing a statement today (08).

SriLankan Airlines says it is closely monitoring the situation and is in contact with relevant national and international authorities, with the safety of its passengers and crew members being of paramount importance.

This announcement came after Iran fired a series of ballistic missiles at two Iraqi bases housing U.S. troops early this morning as retaliation for the killing of Iranian Major-General Qassem Soleimani, the head of the elite Quds Force.

Soleimani was killed early on Friday (03) in an air strike on Baghdad International Airport, which was authorized by the US President Donald Trump.

In this background, Iran vowed to avenge the killing of their military leader. Major General Ismail Qaani, who was announced as Soleimani’s successor just hours after he was killed, vowed retribution for the killing on Monday. Trump had tweeted that the US is ‘targeting’ 52 Iranian sites and will strike ‘very fast and very hard’ if Tehran attacks Americans or US assets.

In the meantime, foreign media reported that several other Asian airlines, too, have rerouted their flights to avoid the Iranian airspace as tensions in the region continue to escalate. It is reported that Singapore Airlines, Taiwan’s China Airlines and EVA Air, Malaysia Airlines have also decided not to fly over the Iranian airspace in view of the latest developments in the region.