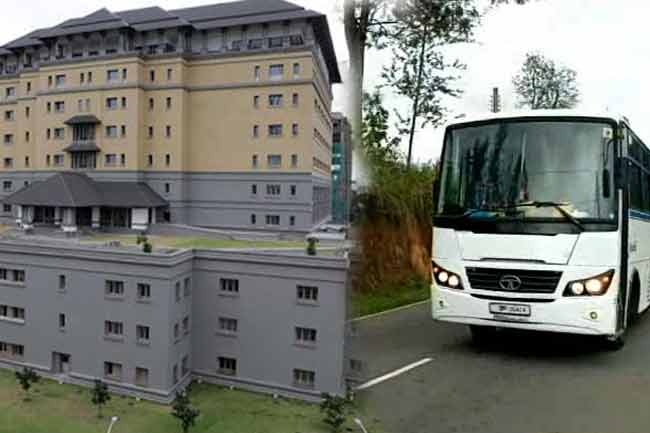 The thirty-three Sri Lankan students, who were quarantined at the Diyatalawa army camp, arrived at the Sri Lanka Army Headquarters in Akuregoda, a short while ago, to leave for their respective homes later this evening (14).

The group were quarantined at the Diyatalawa army camp’s Base Hospital for a period of two weeks following their evacuation from Wuhan, China.

They had departed the quarantine facility at around 10.00 a.m. this morning and are expected to meet with the Commander of Army Lieutenant General Shavendra Silva at the Army Headquarters.

The 33 Sri Lankans, who were left stranded in Wuhan - the epicentre of COVID-19 - were evacuated in a special flight (UL 1423) chartered by SriLankan Airlines on the 1st of February.

As the charter flight had landed at Mattala Rajapaksa International Airport (MRIA), they were received by the members of the Chemical Biological Radiological and Nuclear (CBRN) Response Squadron of the Army, who are qualified to deal with such biological or chemical emergencies.

The Army, on the instructions of the Lieutenant General Shavendra Silva, completed the speedy erection of two 100 x 20 sanatorium-type new buildings at the Base Hospital of Diyatalawa camp within a matter of three days (29 - 31 January).

The returned students were quarantined by keeping them in incubation for 14 days under the close supervision of medical consultants, epidemiologists and other staffers.

During the quarantine period, they were provided with all day-to-day requirements by the Army such as food, refreshments, sanitary requirements and all other amenities, the Sri Lanka Army said.

The students will leave for their respective homes later this evening after meeting with the Army Chief.