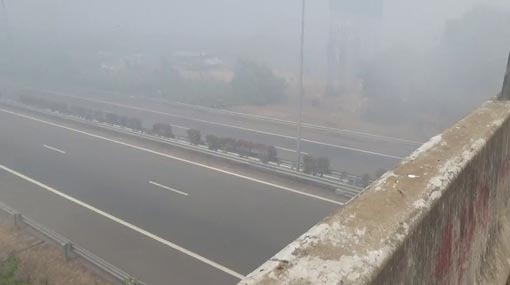 The Katunayake-Colombo expressway which was temporarily closed for traffic due to smoke obstructing the visibility of the motorists has been now fully reopened for traffic, stated the Police.

The Katunayake expressway was closed off for traffic earlier this evening (20) due to the smoke caused by a fire near the road section from R 17.2 to 18.1 of the lane towards Colombo. The thick smoke emanating from the fire has stretched over the expressway reducing the visibility along the expressway for motorists.

A section of the expressway was temporarily closed from Ja-Ela to Katunayake as a result of this while the entire expressway was closed off afterwards as the smoke had continued to spread and impair visibility.

The fire had reportedly broken out at a solid waste disposal center located in the Ambalammulla area in the Gampaha District while the dense smoke emanating from the fire had spread throughout the area and even over the expressway.

A Bell 212 helicopter belonging to the Sri Lanka Air Force (SLAF) carried out ‘Bambi Bucket’ operations in the Seeduwa area, close to the Katunayake Expressway, in order to douse the fire.