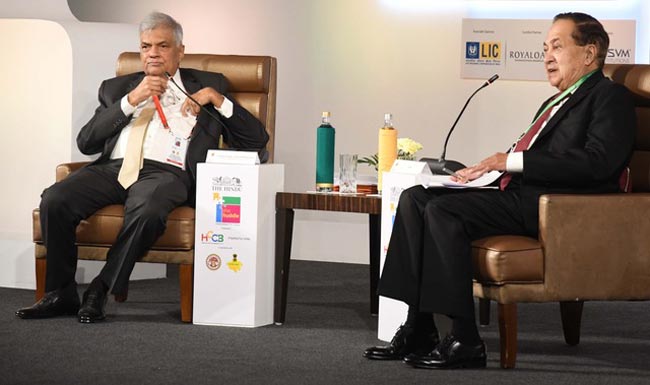 Ranil calls for economic links between South India and Colombo

Emphasising the need for countries in the region to link up both strategically and economically, Wickremesinghe said the postponement of the Kathmandu SAARC Summit in 2017 due to heightened tensions between India and Pakistan had brought the regional grouping “to a standstill”.

Urging the neighbours to iron out differences — including on cross-border terrorism — he said, “Otherwise you may find outsiders coming and telling [you] sort it out...not us in South Asia.”

“SAARC is deadlocked. While BIMSTEC is not a substitute for SAARC, it is, nevertheless a starting point for integration,” he said, in his keynote address at The Huddle, a two-day thought conclave organised by The Hindu in Bengaluru, India.

Integration road map
Proposing an ‘Economic Integration Road Map (EIRM)’, Wickremesinghe said it was important to conceptualise a “sub-region”, consisting of the five southern states of India, and Sri Lanka, to tap the total population of 300 million people and a combined GDP of over $500 billion.

Addressing para-tariffs and non-tariff barriers for successful regional integration, tapping e-commerce and enhancing tourism were crucial to such a road map, Wickremesinghe said.

“The Bay of Bengal is the largest bay in the world, dotted with famous cities and scenic beaches including the Andaman Islands and Phuket. Cruise tourism catering to millions of the emerging Asian middle classes, is a new commercial opening for the region,” he said.

The EIRM, he said, must not only be market-driven and but also be able to provide a deeper integration than the ASEAN-led RCEP ((Regional Comprehensive Economic Partnership) agreement, Wickremesinghe said. “I would suggest that the negotiations for such an agreement be concluded in two years,” he added.

Deep-pocket diplomacy
Responding to a question from the audience, in a discussion moderated by The Hindu Group Publishing Chairman N. Ram, on Sri Lanka leasing out its southern Hambantota Port to China for 99 years, the former Premier spoke of his government then mulling options to deal with the debt on the project.

Wickremesinghe’s government, which rose to power in 2015, tried renegotiating the deal [that former President Mahinda Rajapaksa had originally signed] with China, and President Xi Jinping “didn’t take a hard-line stand”.

In turn, the Sri Lankan government ensured that all security aspects were under its control. “We won’t allow our soil to be used for any action that is deemed to be hostile to India,” he told the audience, invoking instant applause. “I feel that the Chinese at the moment cannot bring their big ships [to our region]. It is basically very strong economic diplomacy that they are into, and it is a question of how to respond,” Wickremesinghe said.

India cannot respond unless it opens up, he observed. “If you want a deep pocket like China, you have to carry out these changes.”

The complete speech made by PM Wickremesinghe:

ECONOMIC AND STRATEGIC INTEGRATION IN THE REGION: RANIL WICKREMESINGHE by Ada Derana on Scribd