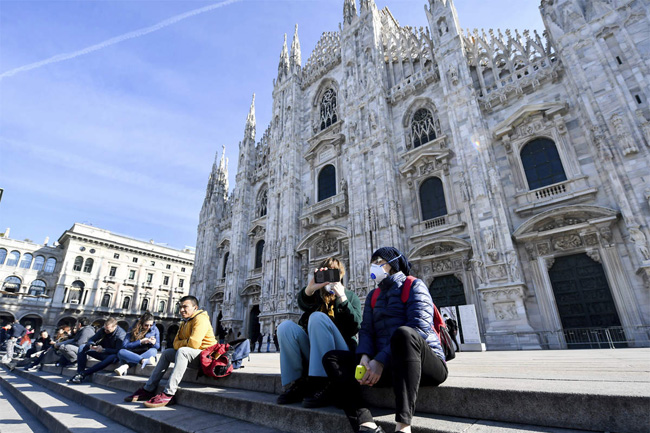 Italy reports seven COVID-19 deaths; WHO says virus not yet a pandemic

A swath of “hot spot” cities and towns across northern Italy were in lockdown Monday as authorities battled to contain a fast-spreading outbreak of the new coronavirus that has killed 2,600 people in China.

The unrelenting spread of the virus pushed global stocks sharply lower Monday amid fears that the outbreak could become a global pandemic — a worldwide outbreak of a serious new illness. The global death toll reached 2,699 on Monday night, with more than 80,000 confirmed cases.

The outbreak is not there yet, said Tedros Adhanom Ghebreyesus, director general of the World Health Organization.

Tedros said a WHO team that spent time in China has determined the outbreak there peaked in late January and early February and has been in decline since.

The U.S. total of confirmed cases rose from 35 to 53 on Monday night, hours after the White House requested $2.5 billion in new emergency funding to deal with the global outbreak. Congressional Democrats, however, Democrats quickly slammed the request as “woefully insufficient.”

The new numbers of deaths continue to push the coronavirus well past that of the 2002-03 SARS outbreak. But the mortality rate, a statistic that measures the deadliness of the virus on infected persons, of SARS is still significantly higher. The latest figures show that coronavirus has a mortality rate of roughly 3.4%, compared to nearly 9.6% for SARS.

A boom in cases in Italy, South Korea and Iran, he said, was “certainly very concerning.” But he said China has shown that the virus can be contained.

In Europe, “protecting our citizens is the main priority,” said Stella Kyriakides, European Commissioner for Health and Food Safety. “We are all taking this situation seriously, but without giving in to panic, disorder or disinformation.”

In Italy, the death toll reached seven Monday night. With 229 cases of the virus confirmed, Italy is easily the most involved European country. Italian Prime Minister Giuseppe Conte has banned people from leaving infected areas, and police have been ordered to fine anyone caught entering or leaving certain towns.

Soldiers patrolled piazzas in Milan, and Venice shut down its iconic carnival three days early as Italy tightened restrictions on large public gatherings that could fan the spread of the virus.

Police roadblocks have been set up to stop people entering or leaving about a dozen towns. Several regions have closed schools, universities, museums, monuments and libraries and banned public events that attract crowds.

Basilicata Gov. Vito Bardi ordered 14-day quarantines for anyone entering his sprawling southern region from the northern part of the country.

Virus investigators in Italy suffered a setback when a person who recently visited China and was thought to be the “patient zero” for the Italian outbreak tested negative for the virus. Kyriakides announced that a team of experts from the European Center for Disease Prevention and Control and the World Health Organization was being sent to help Italy in its efforts to limit the transmission of the virus, known as COVID-19.

“We are following the situation in Italy very closely and commend the Italian authorities for their swift and efficient action,” Kyriakides said.

Iran’s death toll from the coronavirus has risen to 12, parliament spokesman Asadollah Abbasi said, giving the country the most fatalities from the outbreak outside China.

The government rejected a claim from a lawmaker, published in a reformist-leaning media outlet, that 50 people had died. Deputy Health Minister Iraj Harirchi said in a news conference on state TV that “this is not the time for political confrontations.”

In China, the National People’s Congress postponed the legislative session set to begin March 5, citing the nation’s battle against the coronavirus. No new date was set. Also Monday, the virus epicenter city of Wuhan announced a plan to relax the month-long lockdown and allow small groups of nonresidents to leave for their homes. But a few hours later the plan was rescinded.

Government figures have shown a steady decline in the number of new cases, even as cases are sharply rising in Italy, South Korea and a few other countries.